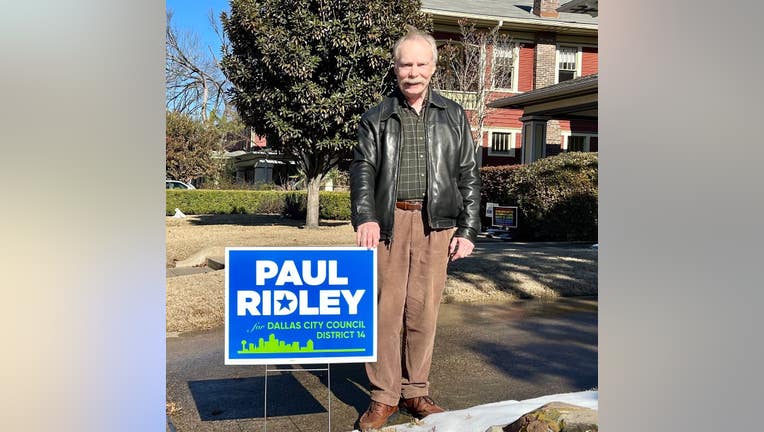 DALLAS - The newly elected District 14 Dallas City Council member says he wants to make his district and the city more livable and focus on the long-term health of Dallas.

Paul Ridley was the only challenger to knock off an incumbent in the recent council elections, winning a runoff against one-term representative David Blewett. Ridley, 68, is a retired attorney and previously served on the city’s planning commission.

Ridley discussed parks, affordable housing, communicating with constituents, the environment and the future of I-345 in an interview with FOX4.

In the past, there have been attempts to turn local parks into stadiums and concert venues, such as at Reverchon Park and Willis C. Winters Park in East Dallas, Ridley explains.

Now on the council, Ridley wants to protect his district’s neighborhoods from situations like those. He believes they could lead to overdevelopment and wants to "guard against efforts to commercialize."

"I believe that neighborhood parks should predominantly serve neighborhoods, and not large 5,000 seat stadiums that are doubling as concert venues," Ridley said. "It should be a place where neighbors can go and relax from the stresses of the day, walk their dogs and recreate and not have to put up with the intrusion of thousands of cars in their neighborhoods, and noise, etc. from large venues."

Ridley said with more people moving to Dallas and a past housing policy that states the city has a shortage of 20,000 units, he wants to preserve existing affordable housing in District 14 and create more affordable housing. The district includes parts of Oak Lawn, Uptown and East Dallas.

"Those people who live on fixed incomes, those who have moderate incomes like public servants, are finding that they can’t afford to buy a house, let alone rent a house or rent an apartment in the district… because so many people want to move here that it's really creating a large demand for housing," Ridley said. "We also need to do it because this is a district well suited to affordable housing in that we have high opportunity areas."

Through weekly newsletters and town hall meetings, Ridley is planning on building avenues for his constituents to communicate with him, something he says his constituents should expect of him.

"I have pledged throughout the campaign to be not only a responsive representative, but one who tells them what’s going on down at City Hall, to tell them what my initiatives are, and what I plan to work on at City Hall," Ridley said. "To talk to them about how they can be involved in city government and in their neighborhood events."

Another campaign promise was mitigating climate change in Dallas. He wants to do so by ensuring that the Comprehensive Environmental and Climate Action Plan, which was approved last year on May 27, is implemented and "doesn’t just sit on the shelf gathering dust."

"It is important to me because I take a long-term vision of the city. I don't want to just be putting out fires of things that happen next week that are a crisis, I want to be thinking down the road and visualize a city that is cleaner, that is greener, and that is sustainable," Ridley said. "In the sense that we are reducing our greenhouse gas emissions, we're reducing our pollutants from vehicles and stationary sources, and so that we can have [and] build a more livable city with less pollution in the city."

Morphing Dallas into a more "livable city" is one of Ridley’s primary goals.

The council member wants "to create more open green space, to provide relief for all of the population that lives in high density housing, and to make [Dallas] a walkable city."

Noting that the city has been a "car centric city" for a while, he hopes to see Dallas become more accessible in the future.

"I am really anxious to see developments in a fashion whereby people don't have to drive clear across town to get to their destination … so people in many cases will be able to walk to their usual destinations," Ridley said. "That will not only decrease our traffic congestion, it will also decrease our air pollution, which is a problem, and it will also make it a more livable city."

Ridley specifically mentioned I-345, a freeway that connects I-30 and Central Expressway.

"It's a barrier to East Dallas to Deep Ellum and downtown. It's really cut off the connection there, physically, and in terms of the visual impact that it has…I will advocate that we replace it with something else," Ridley said.

This is the first of four stories FOX4 will publish this week about the new members of the Dallas City Council.