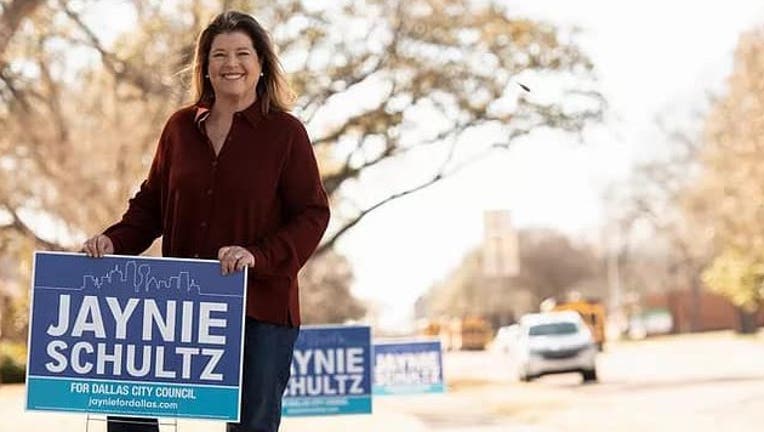 DALLAS - The newly elected District 11 Dallas City Council member wants to make improvements in an overlooked neighborhood and focus on the common concerns of all district residents.

Instead of giving money directly to panhandlers at intersections like Forest Lane and 75 and Royal Lane and 75, Schultz said she is working on an app where residents can instead donate to organizations who help homeless individuals. She also plans on bringing together neighborhood leaders and organizations who support the homeless community to start a campaign that discourages giving money to panhandlers.

"What I’d like to work on is the systemic root of the problem with panhandling, and the challenge is people with very generous hearts in our city, and the more we give to the panhandlers, the more it’s encouraging them to ask for money from people," Schultz said. "I want to work on a solution that helps them, as well as eliminates the problem of having so many folks panhandling on those corners, or any corner for that matter."

The first issue Schultz plans on addressing is the redevelopment plan for the Valley View mall property, a concern many residents approached the councilmember about during her campaign. Schultz defeated Barry Wernick in the runoff election with 53.9% of the votes, a flip of the results in May’s contest that featured four candidates and Schultz finishing in second.

The plan to build a $4 billion mixed-use development named Dallas Midtown on the old mall’s property was adopted back in 2013.

"There’s a plan but I think what became very clear in the campaign is that people are feeling hopeless about it because of the state of the mall, and so I want to support all the efforts for a growth and do some community engagement there," Schultz said.

During her term, Schultz wants to make the Esperanza District - the area from 635 to Spring Valley and 75 to Coit Rd – not only safer, but also work on improving the neighborhood’s quality of life.

She plans on adding more to past council member Lee Kleinman’s Building Blocks Crime Watch program, a collaboration between Dallas police and the city.

Though many residents of the Esperanza neighborhood are Spanish speaking only, Schultz states she will make efforts to ensure their voices are heard and to be able to participate by always having a translator present. Her Council Liaison, Sophia Figueroa, is fluent in Spanish.

Schultz said Mayor Eric Johnson is off to a strong start in beginning a relationship with the new council. She hopes the mayor will act soon to get the council’s committees appointed to determine the culture of the council.

"He’s already met with me, for example, at the Goldmark Center which is in District 11, and we had a really productive talk about my goals and how he can help me achieve those," Schultz said. "He’s already been supportive and very positive with the new council."

Other plans Schultz wants to achieve during her term is to strengthen neighborhood leadership, increase communication within her district through social media and push for the Comprehensive Environmental Action Plan to be implemented.

In the future, Schultz would like to see Dallas have more mixed income neighborhoods, become more pedestrian and micro mobility friendly, and have a strong infrastructure investment program.

"What I want to be known for is someone that listened and that I was always honest and that I worked really hard to take advantage of the assets of this district so that we could leverage them for everyone’s benefit," Schultz said. "…and a person that under my leadership, that the quality of life in the district was actually improved."

This is the second of four stories FOX4 will publish this week about the new members of the Dallas City Council.