While lumber prices have crept down since historic highs in May, wood continues to be a new hot commodity for thieves.

DALLAS - While lumber prices have crept down since historic highs in May, wood continues to be a new hot commodity for thieves.

With demand for building materials high, North Texas home builders are finding it hard to protect their sites.

The lumber thefts are adding to the struggle for home builders to try to keep housing costs down while facing everything from building permit delays to staffing shortages.

Joshua Correa is the owner of Divino Homes. He immediately beefed up his cameras after a theft at his West Dallas home site early Friday morning, but he was targeted again that night.

"And sure enough about midnight or 12:35, we had theft going on," he said. "and we saw the individual walk in and cut the wire to the camera immediately."

Then it happened a third time on Saturday after Correa waited five hours for Dallas police to show up on the first two incidents.

"So I got an alert that there was activity at the job site through our cameras," he said. "And by the time I came back, sure enough he'd already hit us again."

This time, the thief must have thought the camera was still disabled. He was bold enough to haul off all the wood he could carry and fit into his car — and we do mean his car. 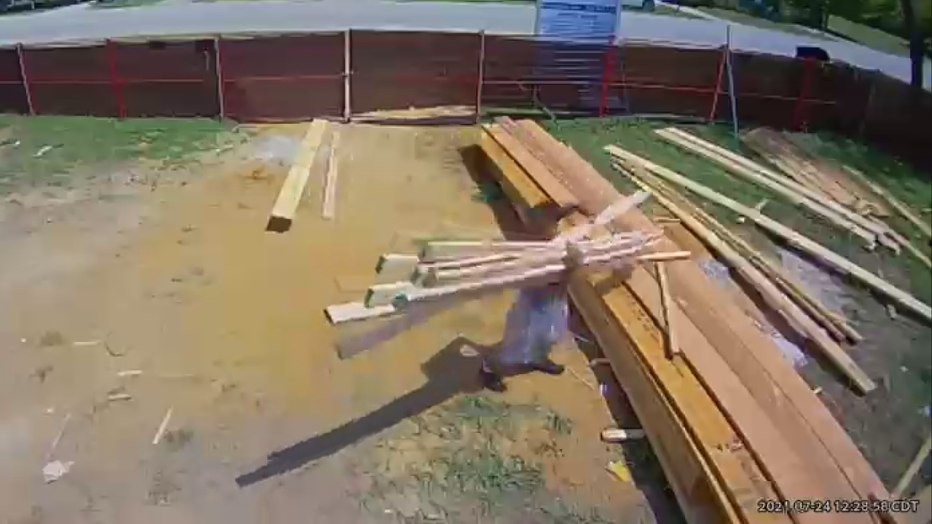 A neighbor nearby captured Ring video of the red four-door sedan with a stash of lumber sticking out speeding off.

"I was frustrated," he said. "I did not get a call until 1:00 a.m. Sunday morning. That's when the police department said can we take the police report down."

The pandemic pushed lumber prices to record highs in May that have only just now begun to come down. But some experts predict another spike as builders who put projects on hold jump back into the market.

Parker and Tarrant County have both reported increases in lumber theft

Not only is the cost of lumber expensive, but it can also add costly delay. It is difficult to know which pieces of lumber are missing until a framer can't find the wood he needs.

For Correa, it is just another frustration in trying to keep his business going and his projects on schedule.

The Dallas Police Department said it is actively working leads in this case. But to protect the investigation, it had no suspect information to release at this time.

Lumber thieves taunt Fort Worth victims: "Thanks for the wood"