A Wylie man was convicted of storming the U.S. Capitol with a holstered handgun, a milestone victory for federal prosecutors in the first trial among hundreds of cases arising from last year’s riot.

WASHINGTON (AP) - A North Texas man was convicted on Tuesday of storming the U.S. Capitol with a holstered handgun, a milestone victory for federal prosecutors in the first trial among hundreds of cases arising from last year’s riot.

A jury also convicted Guy Wesley Reffitt of obstructing Congress’ joint session to certify the Electoral College vote on Jan. 6, 2021, of interfering with police officers who were guarding the Capitol and of threatening his two teenage children if they reported him to law enforcement after the attack. Jurors deliberated about three hours and convicted him on all counts.

The verdict could be a bellwether for many other Capitol riot cases. It could give Justice Department prosecutors more leverage in plea negotiations and discourage other defendants from gambling on trials of their own.

Reffitt, 49, of Wylie, didn’t testify at his trial, which started last Wednesday. He showed little visible reaction to the verdict, but his face was covered by a mask.

Outside court, his wife Nicole said the verdict was "against all American people. You’re going to be convicted on your First Amendment rights. All Americans should be wary. This fight has just begun."

She said her husband was being used as an example by the government. "You are all in danger," she said.

Reffitt was not accused of entering the Capitol building. Defense attorney William Welch said there is no evidence that Reffitt damaged property, used force or physically harmed anybody. 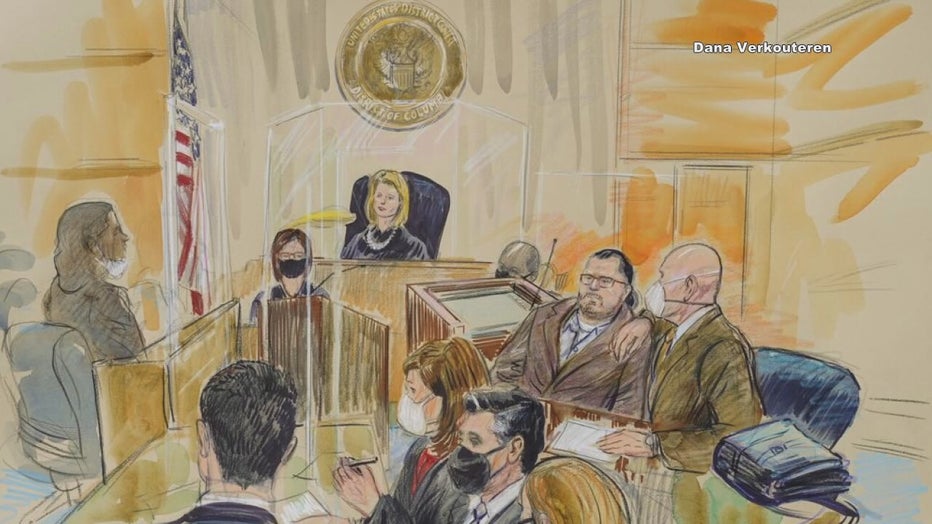 The defense lawyer urged jurors to acquit Reffitt of all charges but one: He said they should convict him of a misdemeanor charge that he entered and remained in a restricted area.

He will be sentenced June 8. He could receive 20 years in prison on the top charge alone, but he’s likely to face far less time behind bars. Other rioters have pleaded guilty; the longest sentence so far is five years and three months for Robert Palmer, a Florida man who pleaded guilty to attacking police officers at the Capitol.

The riot resulted in the deaths of five people, including a police officer. More than 100 officers were injured. Rioters caused over $1 million in damage to the Capitol.

Welch has said Reffitt worked as a rig manager and as a consultant in the petroleum industry before COVID-19 restrictions effectively shut down his business.

Jurors saw videos that captured the confrontation between a few Capitol police officers and a mob of people, including Reffitt, who approached them on the west side of the Capitol.

Reffitt was armed with a Smith & Wesson pistol in a holster on his waist, carrying zip-tie handcuffs and wearing body armor and a helmet equipped with a video camera when he advanced on police, according to prosecutors. He retreated after an officer pepper sprayed him in the face, but he waved on other rioters who ultimately breached the building, prosecutors said.

Before the crowd advanced, Reffitt used a megaphone to shout at police to step aside and to urge the mob to push forward and overtake officers. Assistant U.S. Attorney Jeffrey Nestler said Reffitt played a leadership role that day.

During last Friday’s testimony, prosecutors zoomed in on a video image of Reffitt at the Capitol. FBI Special Agent Laird Hightower said the image shows "a silvery metallic linear object" in a holster protruding from under Reffitt’s jacket as he leaned forward.

Shauni Kerkhoff, who was one of the Capitol police officers who tried to repel Reffitt, said she launched pepperballs that didn’t stop him from advancing. She testified that Reffitt appeared to be leading the crowd up stairs toward police.

Reffitt’s 19-year-old son, Jackson, testified last Thursday that his father threatened him and his sister, then 16, after he drove home from Washington. Reffitt told his children they would be traitors if they reported him to authorities and said "traitors get shot," Jackson Reffitt recalled.

He said the threat terrified him. His younger sister, Peyton, was listed as a possible government witness but didn’t testify. She said that she would talk more later on her own time, but: "Kids should never be used against the parents."

Jackson Reffitt used a cellphone app to secretly record his father boasting about his role in the riot. Jurors heard excerpts of that family conversation.

Jackson Reffitt initially contacted the FBI on Christmas Eve, less than two weeks before the riot, to report concerns about his father’s behavior and increasingly worrisome rhetoric. But the FBI didn’t respond until Jan. 6, after the riot erupted.

Another key witness, Rocky Hardie, said he and Reffitt were members of "Texas Three Percenters" militia group. The Three Percenters militia movement refers to the myth that only 3% of Americans fought in the Revolutionary War against the British.

Hardie drove from Texas to Washington with Reffitt. He testified that both of them were armed with holstered handguns when they attended then-President Donald Trump’s "Stop the Steal" rally before the riot erupted. Reffitt also took an AR-15 rifle to Washington but left it locked up in his car, Hardie said.

Hardie said Reffitt talked about dragging lawmakers out of the Capitol and replacing them with people who would "follow the Constitution." Hardie also said Reffitt gave him two pairs of zip-tie cuffs in case they needed to detain anybody.

Reffitt was arrested less than a week after the riot. The FBI found a handgun in a holster on a nightstand in the defendant’s bedroom when they searched his home near Dallas.

Paul Coggins is a former U.S. attorney from Dallas. He is not involved in the case.

"One of those recording is after Jan. 6, where he says, ‘I am not done yet.’ To me, that’s an indication that this was not the end of the line," he said. "The biggest thing that convicted Reffitt were his own words. That is going to come back and haunt these Jan. 6 defendants is their own words."

"I think it was a good day for the Justice Department. It’s the first case out of the box. It gives them momentum, and it gives them leverage in dealing with the other defense councils representing other defendants in these cases," he said.

More than 750 people have been charged with federal crimes related to the riot. Over 220 of them have pleaded guilty, mostly to misdemeanors. and over 110 of them have been sentenced. Approximately 90 others have trial dates.

The FBI released a statement saying, "rather than take responsibility for his actions at the U.S. Capitol, Mr. Reffitt opted to put his family through a painful trial." It went on to say that "this trial should serve as a reminder for others who committed crimes that day."

Reffitt will be sentenced on June 8. Obstructing Congress alone could lead to 20 years, but Coggins predicts his sentence will be shorter.