Most polls still show Cornyn with a several point lead over Hegar, but she has been outraising him lately.

Cornyn acknowledged a lot of people have moved to this state since he last won. He says he’s not taking this for granted.

There's a lot of uncertainty that make Election Day more difficult to predict. 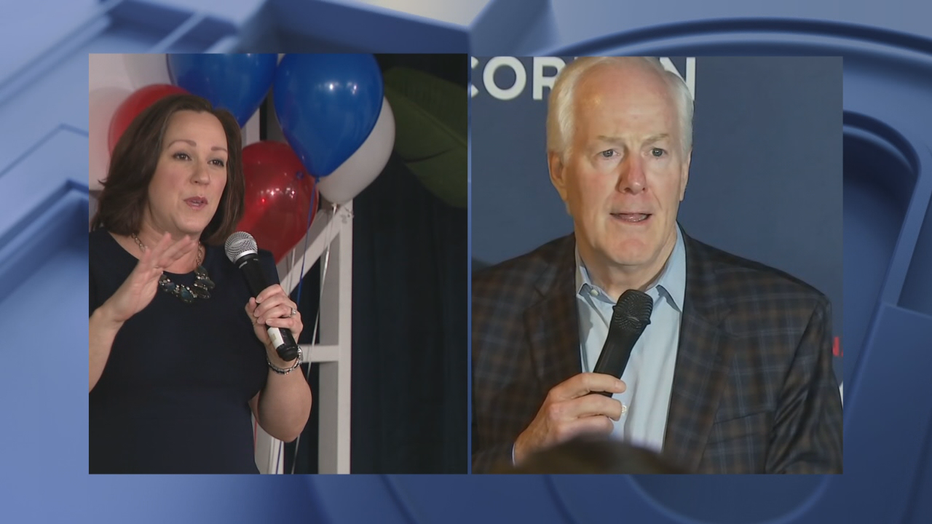 Sen. Cornyn arrived in the rain to vote early in Austin on Wednesday. His forecast for his 2020 prospects murky.

“Every race is too close for comfort. I’m not taking anything for granted,” he said. “We are seeing an enormous number of people voting which is a good thing. But obviously in the six years since I was last on the ballot, there’s been a lot of changes in this state.”

Hegar has raised roughly triple the amount of cash as the three-term U.S. senator has in the first two weeks of October.

“I think the thing that worries me the most is all this outside money coming into the race. It’s unusual,” Cornyn said.

Hegar voted early in Round Rock on Tuesday. She said she’s not making much of the polling.

“I’m very confident. And I don’t look at polls because polls are not accurate in Texas,” she said.

Whether the money in this U.S. Senate race will make a difference is unclear, says SMU Political Science Professor Matthew Wilson. What is clear is Democrats nationwide are spending a lot in Texas.

“Cornyn is running as if he thinks this race is closer than the polls show,” Wilson said. “The other thing it points to in this race is that Democrats have really focused up and down the ballot on Texas. An enormous amount of money has come into Texas this electoral cycle in an attempt to kind of put down a Democratic flag.”

But perhaps Cornyn’s public worry highlights the uncertainty going into 2020.

There's the increased early voting turnout and a presidential race that some predict could be the closest in Texas in years. It was categorized by the non-partisan Cook Political Report Wednesday as a tossup.

As Wilson points out, it’s different than Cornyn’s last election.

“He’s not facing those favorable tailwinds from six years ago. He’s running in a more competitive environment,” Wilson said. “And I think he’s trying to signal to everybody this is going to be much more of a fight.”

Wilson pointed out at this point in a race, there’s not a lot more you can do with TV ads. People are oversaturated with them.

Money can help with grassroots efforts like door knockers, phone banks and other measures to get people to the polls who might otherwise stay home.