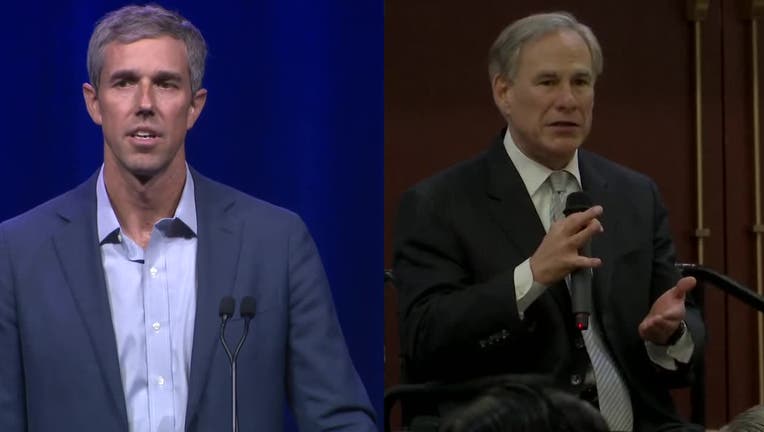 DALLAS - The two candidates for Texas governor address the issue of funding for police departments while at campaign stops Wednesday.

Gov. Greg Abbott pitched himself as the candidate who best supports law enforcement in Texas.

The Republican incumbent campaigned alongside members of the Fort Worth Police Officer’s Association on Wednesday.

He pledged to reform the state’s bail system if he’s re-elected to make it tougher for people accused of violent crimes to be released.

He also accused his Democratic challenger, Beto O'Rourke, of being hostile toward law enforcement. In TV campaign ads, the governor accuses O’Rourke of wanting to defund the police.

"Beto’s approach to defund the police is an extraordinarily dangerous approach, a deadly approach. And when we in the capital saw that a city in Texas defunded the police, we stood together and said, ‘Not on our watch will we allow our law enforcement officers to be defunded.’ That’s exactly why they passed and I signed a law that will defund any city that defunds the police," Abbott said.

O’Rourke denies that he supports defunding any police department.

While at a campaign stop in The Woodlands, north of Houston, he blasted the governor for accusing him of not supporting law enforcement.

"When he tries to scare you about defund the police, know this. I fully support funding law enforcement, making sure they have the training necessary and also the accountability that breeds the kind of trust that we need to protect everyone in every single community," he said.

Texas: The Issue Is - Interview with Beto O'Rourke

O’Rourke ripped his Republican opponent for failing to address gun safety after the Uvalde school shooting.

He also promised to reverse the state’s near-total ban on abortion in Texas and improve the state’s power grid. The two issues are cornerstones of his campaign.

About 300 people attended O’Rourke’s campaign event in The Woodlands, which is part of a solidly Republican Montgomery County.

A new poll of registered Texas voters shows Abbott leading O'Rourke by 5 percentage points in this year's race for governor. Many polls taken since July have shown Abbott with a 5 to 7-point lead.

The two candidates are scheduled to debate each other on Sept. 20 at the University of Texas Rio Grande Valley in Edinburg.