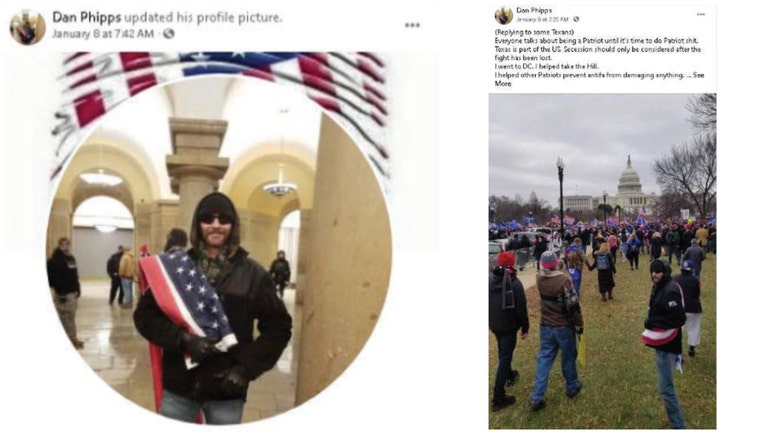 DALLAS - A Garland man is facing federal charges for alleged crimes related to breaching the Capitol building earlier this month.

According to a criminal complaint, a Fort Worth police officer saw one of Daniel Phipps’ photos on social media and tipped off federal investigators.

The photo appears to show Phipps standing inside the Capitol holding an American flag over his shoulder.

In other posts, Phipps commented that he had been inside the Capitol on Jan. 6 and that he was from Texas.

"Everyone talks about being a patriot until it’s time to do patriot sh--. Texas is part of the US. Secession should only be considered after the fight has been lost. I went to DC. I helped take the Hill. I helped other patriots prevent Antifa from damaging anything. I exercised my 1st amendment right to take grievances to our representatives. It was a (mostly peaceful) political protest. Where were you on 06JAN21?" he wrote, according to the criminal complaint.

Phipps also allegedly commented that he was considering attending another "more dangerous" protest in the days leading up to the inauguration. He said that he would bring a "helmet and gas mask," the court document states.

He’s charged with knowingly entering or remaining in a restricted building or grounds and disorderly conduct on the Capitol grounds.