Logan Barr was arrested back in July for aggravated assault with a deadly weapon after a Texas Rangers investigation found that Ross, even while holding a knife, "did not pose a reasonable and immediate threat" to the officers when he was shot.

Investigators say Logan Barr grabbed the wrong weapon and shot and killed an armed murder suspect. It happened in the Fort Worth suburb of Forest Hill last June.

Barr was indicted by a Tarrant County Grand Jury on Thursday for murder in the shooting death of 32-year-old stabbing suspect Michael Lee Ross last June.

Barr was arrested back in July for aggravated assault with a deadly weapon after a Texas Rangers investigation found that Ross, even while holding a knife, "did not pose a reasonable and immediate threat" to the officers when he was shot.

On June 9 2021, Barr was one of three officers who responded to a QT gas station after Ross allegedly stabbed 34-year-old Kiyana Hall in the parking lot. She eventually died.

According to an arrest warrant affidavit from last year, Ross was standing in a nearby drainage culvert while holding a knife, ignoring the officers’ repeated commands to drop it. 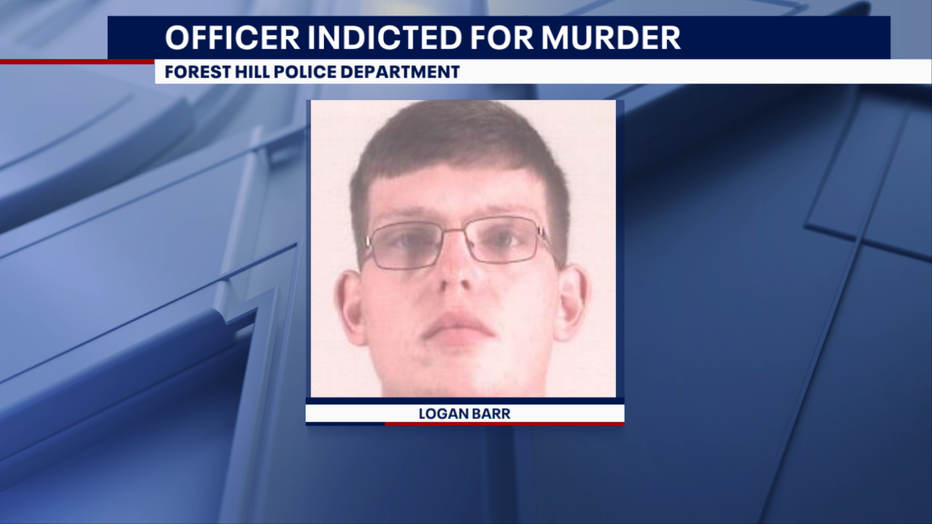 Forest Hill police initially said Ross turned toward officers with a knife, but a DPS investigation and body camera evidence proved that was not the case.

In August, Ross’ mother, Regina Syas, told FOX 4 her son was an Army veteran who lived with mental illness.

"The police officer who shot my son, I need him prosecuted," she said in the August interview. "I need it brought to trial and not pushed under the rug."

Barr’s attorney released a brief statement on Thursday calling Ross a "knife-wielding murderer" and said they look forward to their day in court.

Richard Alpert is a former Tarrant County prosecutor not involved in the case.

"I think the situation of being ordered to do something by a superior officer could potentially play into this," he said.

Alpert says murder and aggravated assault are both first-degree felonies with a punishment range of five to 99 years in jail.

"Aggravated assault allows you to prove it with a lesser mental state of recklessly, whereas murder requires intentionally or knowingly," he said. "I think when you have a situation where someone’s death is caused, I think people without legal training generally they’re going to generally default and think ‘well that sounds like murder.’"

Barr’s attorney wouldn’t provide much more comment about the murder charge other than the written statement. But he did point toward a "disclosure" by prosecutors which said the medical examiner couldn’t determine with certainty that Ross died from his bullet wounds rather than injuries suffered from the "less-lethal rounds" shot by Barr’s supervisor.

It’s unclear whether the Tarrant County District Attorney’s Office recommended the murder charge over the assault charge to the grand jury because that recommendation would only be heard by the jury.

"In presenting the case to the grand jury, it is certainly possible that the grand jury was given both options," Alpert said. "They were told you can indict on this or you could indict on that with or without a recommendation as to which to pick."