A fuel tanker truck and a trash truck collided. At least one driver was taken to a hospital. It's unclear if the other driver was injured. But during the cleanup, there was another incident that resulted in an injury.

NORTH RICHLAND HILLS, Texas - One person was killed and two people was injured after a fiery Wednesday morning crash near the Haltom City and North Richland Hills city line.

A fuel tanker truck and a garbage truck collided in a construction zone on North Loop 820 near Highway 377.

One of the drivers died. It's not clear which one. The other is in critical condition.

A third person was also injured during the cleanup and had to be flown to the hospital with severe burns.

"It was a fiery scene," said North Richland Hills Officer Micah Hayman. "There was a large fire resulting from the fuel truck, and there was a fuel spill which caught on fire."

Diesel fuel leaking from the tanker triggered the flames and quick action by first responders. They were aimed at saving the seriously injured driver of the tanker truck. 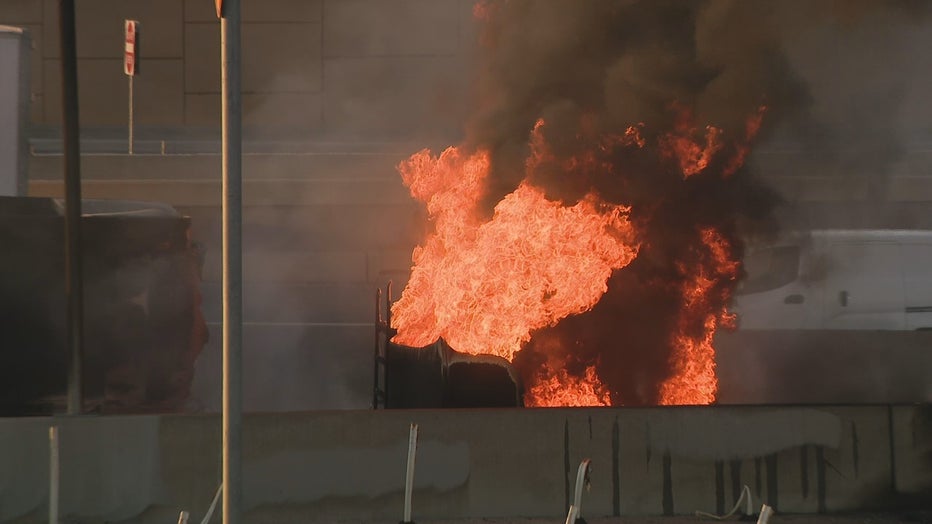 "All I know is that he had severe burns, and he was transported by air ambulance to an area hospital," Hayman said.

The backup snarled traffic for hours. The express lanes remained off-limits even after the main lanes reopened.

One crew member in the scene's clean-up was injured in the effort to remove the vehicles. An ambulance responded when the garbage truck slipped off the crane and struck him.

All of it happened as holiday shoppers out to purchase last-minute presents or those traveling to their holiday destinations.

First responders urge people to take notice and realize the need for caution on the roads during this busy season.

"There's a lot of drivers out there who are aggressive," said driver Aaron Jenkins. "Especially during the holidays because it's Christmas and its stressful, family, everything like that. So, yeah. Definitely slow down."

Police believe speed was a factor, and they continue to stress the need for staying alert and undistracted while behind the wheel.

Several vehicles were involved in a fiery crash Wednesday morning on Loop 820 going from North Richland Hills into Haltom City.

"This is just one more example of everybody’s rushing to get everywhere. It's the holidays," Hayman said. "People just need to slow down. And if you're going to be late, it's ok to be late. I’d rather be late than in a major accident."