The family of the 15-year-old boy who was critically injured in the Timberview High School shooting is asking for prayers as he struggles to recover.

ARLINGTON, Texas - The family of the 15-year-old boy who was critically injured in the Timberview High School shooting is asking for prayers as he struggles to recover.

Zacchaeus Selby’s mother, Iysha Selby, talked to reporters Friday as he underwent another round of surgery.

She said he has been in and out of a drug-induced coma. But during the times that he is more alert, he has been able to squeeze her hand.

"He has tubes in this throat and in his nose. He just lays there," the 15-year-old’s mother said while trying to hold back her emotions.

Selby was one of four people hurt in Wednesday’s school shooting at Timberview High School in Arlington.

Police said he and 18-year-old Timothy Simpkins got into a physical fight in a classroom. Others tried to break up the fight, then Simpkins pulled a handgun out of his backpack and shot Selby multiple times.

A 25-year-old teacher, identified by students as Cedric Petit, was also shot and a teenage girl was grazed by a bullet. A pregnant teacher fell and was hurt but is okay.

That’s how she learned her son had been shot Wednesday morning. She then rushed to the school.

She then watched as the ambulance raced with her son to Medical City Arlington, where he underwent a second four-hour surgery Friday.

Simpkins was arrested after an hours-long manhunt and charged with three counts of aggravated assault with a deadly weapon. He posted bond a day later and was released from jail.

His family claims he was being bullied and was trying to protect himself.

Police advised Selby’s family not to talk about what prompted the fight because of the ongoing investigation. But they said they want people to know he is not the monster people are making him out to be on social media.

"We’ve seen the video ourselves. We were shocked to see the video because we’ve never ever seen him that way before. I’ve never seen him fight with even his sister or his older brother. He’s a mild-mannered, soft-spoken child," said Kathy Selby, his grandmother. 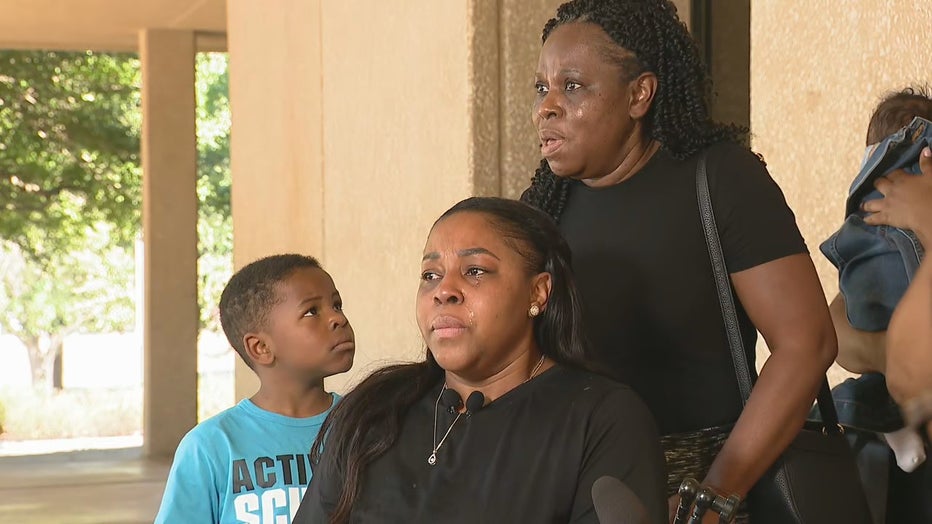 The family described him as a sweet and caring kid who loves football and video games just like most teenagers his age.

Selby’s family said his condition has improved slightly since he was admitted. They are optimistic about his recovery but said it will be a long one.

"Everybody’s so nice and sweet and caring. We’ve been getting so much love and support. They said the visiting room is just full of people trying to come in and see him. One of the other victims, the teacher, their family came and prayed with us. We’ve had the police come and speak with us and give us hugs and the staff is nice. We’ve had staff pray with us. I mean, the love and support is… it’s so much," his mom said.

RELATED: Teacher recalls what he did to protect students during Timberview High School shooting