Dallas students raise $120,000 for Ukrainians as part of lesson about Russia-Ukraine War

Students at St. Rita's Catholic School in Dallas decided to turn a world events lesson into a fundraiser, and presented Catholic Relief Services with a check on Friday.

DALLAS - A Dallas Catholic school is not only teaching its students about the war in Ukraine, it is also fundraising to help those impacted by it.

This started with students crafting and selling yellow and blue ribbon pins to show support of Ukraine.

Then students each started bringing in a dollar.

As of Friday, the school raised $120,000 in direct assistance for Ukraine.

It's hard to watch what's happening in Ukraine and not want to take action.

Cities are crumbling from attacks by Russian forces and Ukrainian families have been forced to flee their homeland in order to survive.

So students at St. Rita's Catholic School in Dallas decided to turn a world events lesson into a fundraiser. 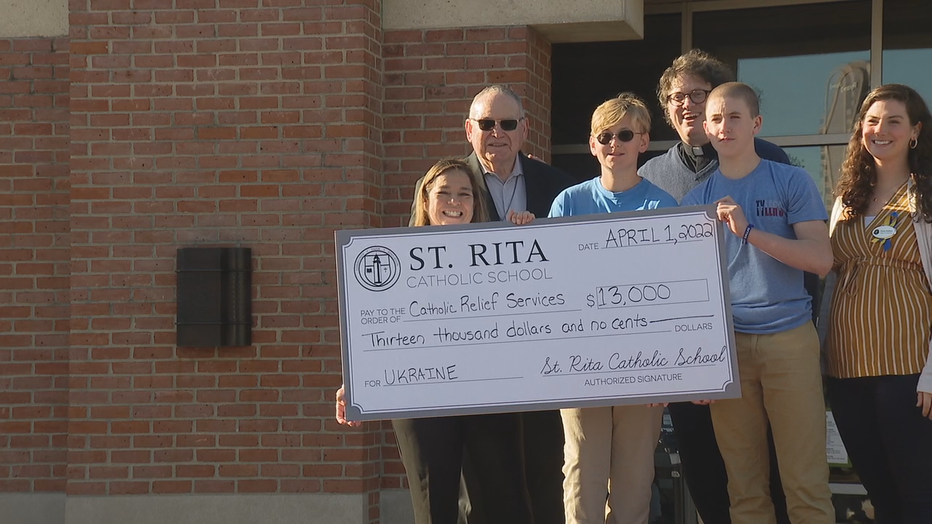 At a rally Friday, students presented Catholic Relief Services with a check for $13,000.

That money will go a long way to help those in Ukraine.

"Things don't cost that much over there," said Norma Valdez, with Catholic Relief Services. "We try to buy things from the local economy to keep things stable."

And that's just a fraction of the funds raised by students and their parents.

"I'm crying because, my first class, I had four kids coming in with $100 each. They were asked to bring in one dollar," said Agnes Denvir.

Denvir is a world arts teacher at the private school. She's the one who initially felt compelled to do something.

"I actually teach a very little basic Ukrainian here as part of one of my world electives," she said.

The students were quick to respond and took it upon themselves to learn more about the war in Ukraine.

"It was really motivating to hear that, and eye-opening to know what they were going through," student Thomas Andrews said.

"I think it’s terrible to think about, I don't even know half of what is going on. I think a lot of it needs to be more publicized," student Nathan Long added.

One family was so concerned about the situation in Ukraine and touched by the fundraising efforts of the students that they wrote a check for $100,000 for the cause.

"It was very, very moving to see that. The kids and the families were responding," Denvir said.

For Ana Maria Rios, the war in Ukraine struck a nerve. Her grandparents are Cuban immigrants, who like millions of Ukrainians, were forced to pack up and go years ago and make a new life in another country.

"We all need to help each other, no matter where we live, or matter what's different about us," she said.

There was a woman and her son at Friday’s event who just arrived here from Kyiv on Monday.

The woman's sister lives in Dallas.

She heard about what the kids were doing and wanted to be there to thank them in-person.

She said Ukrainians are feeling the love from around the world.