Dallas police are searching for the driver of a pickup truck who fled the scene of a head-on crash with an SUV Friday night that killed two teenagers and injured three others.

DALLAS - Dallas police are searching for the driver of a pickup truck who fled the scene of a head-on crash with an SUV Friday night that killed two teenagers and injured three others.

Police said the pickup was going south on Esperanza Rd., west of Highway 75 in Far North Dallas, when the driver crossed into oncoming traffic, slamming head-on into the SUV. 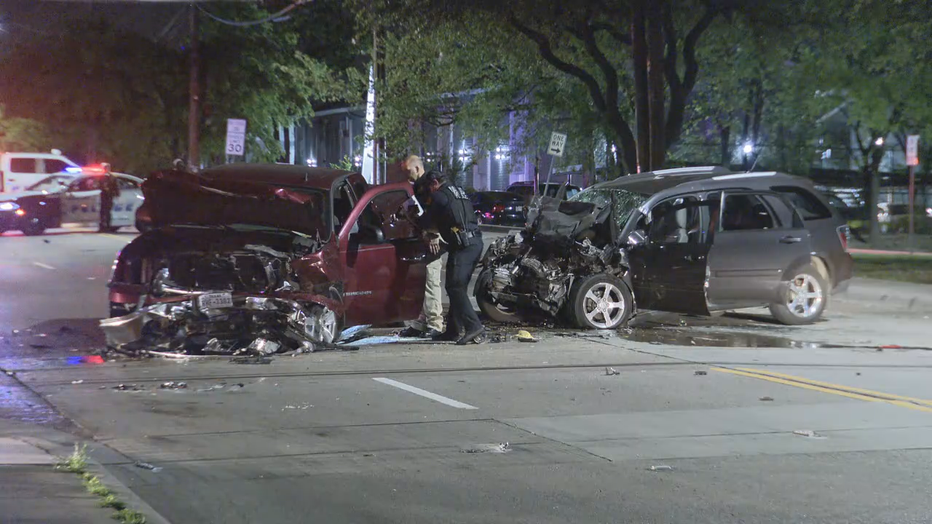 The driver of the pickup ran away.

Family of the teen victims said they were on their way to get food at the time of the crash.

Family said 16-year-old Crystal Pineda was behind the wheel and her 15-year-old brother, Andres Pineda, was in the passenger seat.

"It happens out of nowhere. The last phone call I got from her was at 8:49 p.m. and this happened at 9 p.m." the victims' mother, Eloisa Morales, recalled.

The siblings were pronounced dead at the hospital.

"That is not fair. They were young and had a whole life ahead of them. They had dreams, you know," the victims’ stepmom, Daniela Martinez, said.

"They were best friends. They always said they were twins," Martinez said about the siblings.

Their fellow classmates, along with extended family, carried flowers to the crash site, unable to comprehend two lives are now gone.

Police are continuing to search for the driver of the pickup truck, whose identity is not yet known.

"He just left instead of him helping my kids," Morales said. "At least get them out of the car. If you would’ve done that, they maybe wouldn’t have been dead."

Video from the scene shows investigators placing drink containers in an evidence bag from inside the pickup.

The suspect left his car at the scene. Now, the pickup truck is part of the investigation for Dallas police.

Anyone with information about the suspect is asked to call Dallas police or email Det. Kenneth Watson at kenneth.watson@dallascityhall.com.