The decision comes as experts say it appears that Dallas County has avoided a peak in exchange for what may be a hump.

The decision comes as experts say it appears that Dallas County has avoided a peak in exchange for what may be a hump.

Commissioners approved the extension in a 3-2 vote Tuesday afternoon, but there are looming questions whether the order will be able to stay in place.

"The lower number today of new COVID19 positive cases is encouraging and we will watch closely to see if this is the beginning of a trend downward or a blip on the day we switch reporting to a new database system," Dallas County Judge Clay Jenkin said on Tuesday. "#SaferAtHome was extended today for two weeks. This is necessary to keep you safe and stabilize non-essential movement as we bring businesses like ‘retail to go’ and others back."

Dallas County legal counsel told the commissioners the order to extend “safer at home” until May 15 is not in conflict with Gov. Greg Abbott's order because it is “beyond the governor’s current order,” which expires April 30. But Gov. Abbott said Tuesday that his executive orders will overrule counties and that he plans to issue updated orders next Monday. 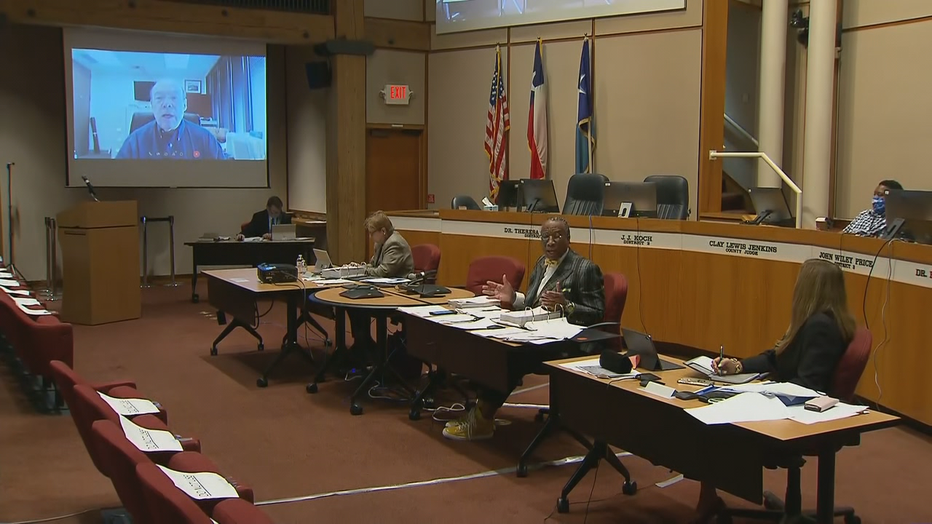 The governor said his orders take precedence over local rules. Judge Jenkins says ‘safer at home’ will not conflict with the governor.

“‘Safer at home’ does not mean you can’t go to a retail business to-go, or go have your surgery or the thing that will open next. It says as we go about our lives, we keep that six-foot distancing,” he said.

Gov. Abbott was asked about the Dallas County extended order in a press conference Tuesday.

Commissioners approved the May 15 date as a compromise, of sorts, after health officials urged them to extend the county order until the end of May. The current Dallas County stay-at-home order was set to expire on April 30.

Dallas County Health Director Dr. Philip Huang said he didn't believe it would be safe to lift the county’s current restrictions on gatherings until at least May 31.

Other infectious disease experts told commissioners they don’t believe elective surgeries and retail-to-go should be allowed until at least May 1, which is a week later than Gov. Greg Abbott has proposed.

Dr. Robert Haley said the curve in Dallas County may be flattening, but it’s hard to tell. He thinks even retail-to-go could be dangerous.

And if it is successful and the virus does not explode, Dr. Haley encouraged commissioners to wait for another three to four weeks before talking about opening more businesses.

Haley said after the Spanish Flu, the communities that did the best job controlling the virus rebounded the fastest. He believes Tennessee and Georgia are reopening too fast and will have an explosion in coronavirus cases.

“The consensus that the groups have been having at this point is that we do need a baseline level of stay home, staff safe that continues as we try to open up things. And everyone does want to open up things but we don’t want to do it in a dangerous way,” Dr. Huang said.

Dallas County Commissioners voted Tuesday to extend the countywide stay-at-home order until May 15.

At least one commissioner questioned the experts.

“You told us that particular time that again that we would peak either at the end of April or the first of May. Now I’m hearing you say that you are augmenting that and you are now saying, ‘Well, maybe it’s gonna be May 31.’ Which is it?” asked Commissioner John Wiley Price.

However, Dr. Mark Casanova with the Dallas County Medical Society conceded that May 15 could be an appropriate time to revisit the county's stay at home order.

“We can set that date. We can continue great practices and hope and pray May 15th works itself out affirmatively,” he said. “If it comes around, we are in a different setting. We can have that conversation then.”

Dr. Casanova said Dallas may be succeeding in avoiding a spike altogether.

“The peak is now a hump,” he said. “And that is a beautiful thing.”

“You need to have two weeks of decline number of cases and hospitalizations so that set some of the timeline,” Dr. Huang said. “We talked about the peak being end of April or early May.”

“This sucks. Nobody likes this stuff,” Jenkins said. “But we gotta do that because that is our best chance to be successful as these businesses open up.”

Jenkins said Texas is currently testing 27 out of every 100,000 people. He’d like to see that number increased to about 138 before things start reopening. Jenkins hopes the tests will show that COVID-19 is often symptom-free and ultimately less deadly than first believed.

Dr. Huang says our doubling rate has slowed from a few days to now positive tests doubling every two weeks.