About 6,000 doses of Eli Lilly's monoclonal antibody treatment are now in the hands of medical professionals throughout Texas.

The first outpatient treatment for COVID-19 was distributed across Texas on Thursday.

Governor Greg Abbott said it is a significant step in the fight against COVID-19 and praised the ability of medical innovators to create the medicine in months instead of years. But he warned it doesn't mean people can let their guard down as cases continue to spike statewide.

About 6,000 doses of Eli Lilly's monoclonal antibody treatment are now in the hands of medical professionals throughout Texas.

“The immediate goal is to reduce the lack of capacity at hospitals,” Abbott said.

The medicine, which blocks the virus from entering healthy cells, takes an hour to administer through an IV. It is specifically intended for people with mild or moderate symptoms before they require hospitalization. It’s similar to the drug taken by President Donald Trump when he was diagnosed with COVID-19.

Only people over 65 with another high risk condition are eligible to receive the medication.

“A lot of the people in nursing homes would automatically qualify,” Abbott said. 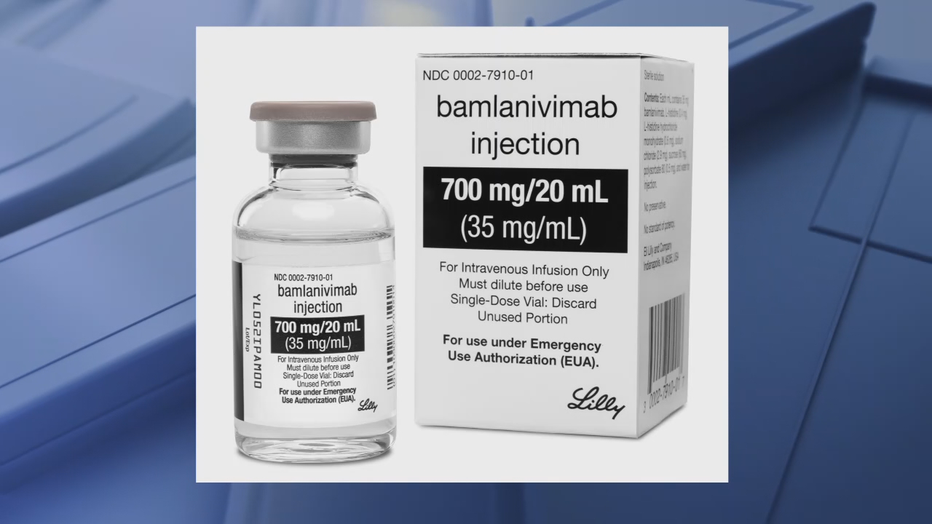 Data about its effectiveness is promising, but scarce.

Doses of the drug are also scarce, with hospitals, like Parkland, receiving just a few dozen doses.

This is another tool in the fight against rising hospitalizations, but the question remains: how effective will it be?

“The cavalry is coming when it comes to COVID-19,” Gov. Abbott said.

The governor is choosing to focus on the medical advancements, rather than government restrictions, as the weapons of choice in this latest battle against COVID-19.

“The future number of people going to hospitals should be on the decline going forward with the receipt of this drug,” Abbott said.

The drug is administered via an IV drip, over the course of about 60 minutes.

It’s meant for people infected with COVID-19, who aren't in the hospital, but who are at risk of hospitalization.

“If we can catch them right in that tiny little window, then we can give them this antibody,” Dr. Crystal Howell explained.

Dr. Howell is a North Texas pharmacist who specializes in infectious diseases and teaches at the UNT Health Science Center.

She notes that the drug, distributed under an FDA emergency use authorization, has limited research backing it up.

“A lot of people, myself included, are saying, ‘Okay, maybe this is an option, but we don’t really know yet,” she added.

A recent statement from the National Institutes for Health said: “there are insufficient data to recommend either for or against the use of bamlanivimab.”

If it is effective, it’s also unclear how many doses will come, in what the governor described as "routine shipments."

The governor’s office did not say how many are headed to North Texas, and health experts still say it’s extremely important people do everything they can to avoid getting sick in the first place, instead of relying on a new therapeutic.

“I hope it works, I really do. I hope it’s able to keep people out of the hospital, I suspect that’s why it got the emergency use authorization is because this is being used as like a ‘you got it, let’s prevent complications,’” Dr. Howeel added.

The governor did not outline where the medication will be administered. But the state health commissioner said there is a low risk of allergic reaction that warrants extra precaution.

“If any kind of emergency, any kind of adverse reaction took place, the personnel and the setting would be equipped to deal with that reaction,” said Dr. John Hellerstedt, Texas Public Health Commissioner.

The governor's team is focusing first on the state's hardest hit regions -- primarily West Texas. They cautioned it will take time to see a reduction in hospital numbers. Other doses will be offered to 64 hospitals in North Texas, who can choose to accept or decline their allocations.

FOX 4 reached out to some of the big hospital systems in North Texas.

Parkland said it has received 100 doses. Hospital officials are still working on a plan to roll it out.

Baylor Scott & White didn’t have a number, but a spokesperson said they anticipate getting limited shipments, and are working on its process for using the drug.

The first outpatient treatment for COVID-19 was distributed across Texas on Thursday.