People in Plano say hand washing will be impossible if the city follows through with water termination notices.

PLANO, Texas - People in Plano say hand washing will be impossible if the city follows through with water termination notices.

Those who can’t pay their bill during the crisis are getting served with disconnection notices. But there’s some new information the city didn't share.

The notice some Plano residents received is specific. It gives the date and time of disconnect and even the fee structure and penalties for late payment if you want to retain your service. 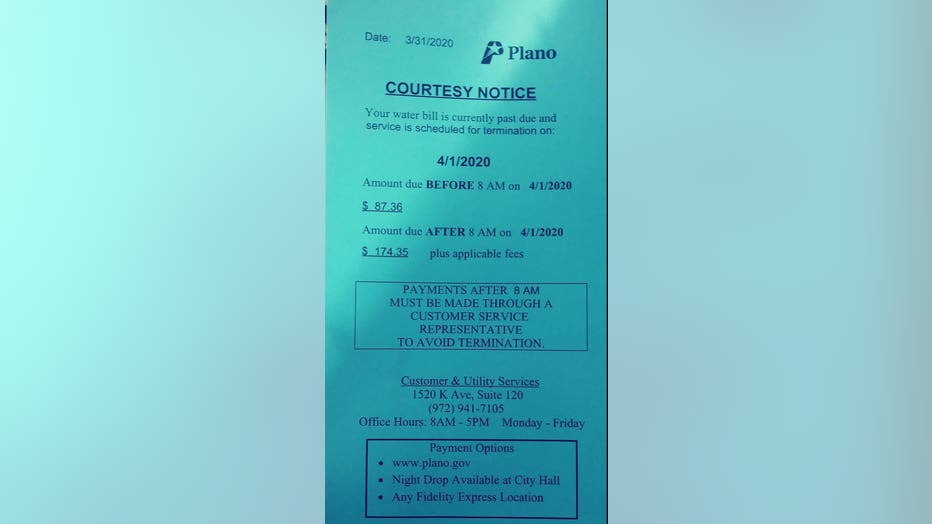 The city confirms there are disconnect notices, but they added the termination details aren't exactly true. The city decided on March 17 that they would not shut off anyone's water for non-payment but continued to send termination notices anyway.

“You have your practices that you do all the time. And then you realize, ‘Okay, this is maybe not the right thing to do right now. This is the time we should show compassion and not even give the appearance on a piece of paper that we're gonna shut someone's water off,’” said Steve Stoler with the city of Plano. “Because that's not the truth. We're not shutting anybody's water off.”

The city has now completely stopped the practice of blue hang tag termination notices for now. Again, they are not shutting off any water service. They did point out that the notices generally go out after two months of non-payment.

The city also confirms that since their decision to halt all water service disconnections as of March 17, they continued to send out 1,115 termination notices which incorrectly say just the opposite.