The Dallas Police Department along with local and federal partners announced a successful violent crime bust targeting the "Hamilton Park Posse.' More than 200 pounds of cocaine, marijuana and fentanyl were seized. Police also recovered dozens of firearms and hundreds of thousands of dollars in cash.

DALLAS - The Dallas Police Department along with local and federal partners announced a successful violent crime bust that targeted a Dallas gang.

There were nearly two dozen arrests, and police seized cash, drugs and weapons.

While many in the neighborhood did not want to do an on-camera interview, multiple people said they feel relieved knowing some of the criminal activity has been stopped.

Hamilton Park off Central Expressway and Forest Lane has a troubled history with crime. 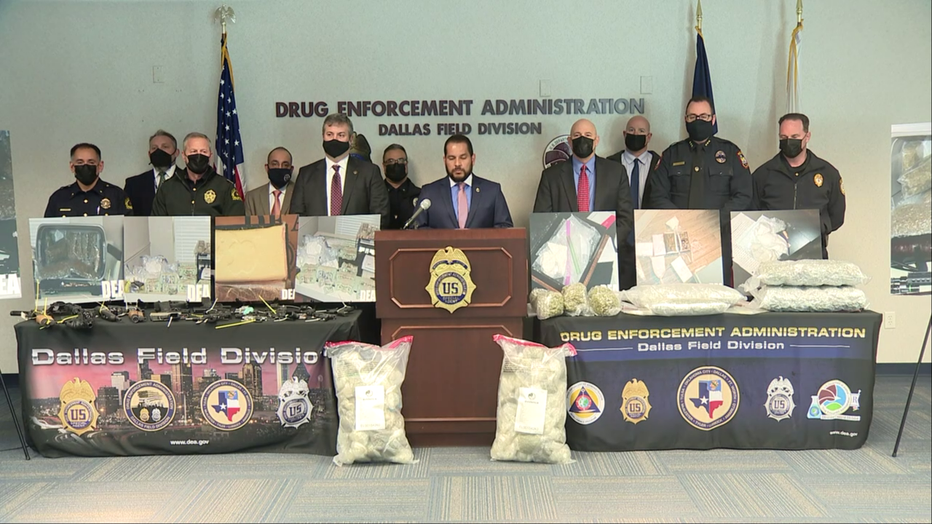 "That stops now. These street corners will be clean," said Eduardo A. Chavez with the DEA Dallas Field Division. "We back the community in Hamilton Park, and Hamilton Park is forgotten no more."

Wednesday, the DEA and other law enforcement agencies gave an update on a Tuesday drug bust netting 20 arrests.

"This 19-count indictment and arrests are a 15-month investigation targeting the ‘Hamilton Park Posse,’ a known gang in Dallas dedicated to drug distribution, violence, and senseless intimidation in the Hamilton Park neighborhood for far too long," Chavez said.

More than 200 pounds of cocaine, marijuana and fentanyl were seized. Police also recovered dozens of firearms and hundreds of thousands of dollars in cash.

"The dope sold in Hamilton Park did not have an imaginary boundary in the one-and-a-half miles of Hamilton Park or even in the city limits of Dallas," Chavez said. "Drug trafficking and violence affects every shred of where you may live."

Dallas police say the gang is responsible for more than 70 violent crimes since 2019. The crimes range from assault to robbery and murder. The charges laid out in the 19-count indictment are mostly drugs, money laundering and weapons charges.

"You are being watched and you will not act with impunity," said DPD Asst. Chief Mike Igo.

Over the July Fourth weekend last year in the same neighborhood, six people were shot and three people died.

Investigators say there were more than 100 shell casings and half a dozen guns used in the shooting. Four teens were arrested and charged with capital murder.

FOX 4 asked if there was any connection to the people involved in that shooting and the Hamilton Park Posse. The Dallas Police Department referred us to the DEA. The DEA did not make that connection during Wednesday’s press conference. Regardless, authorities say this bust will lead to a crime reduction.

"The work must continue building lasting and irreversible changes to strengthen our neighborhoods must be at the forefront," Igo said.

The DEA says there is one more person they have yet to arrest. The operation also included law enforcement agencies as far as California.