Questions about what the responding officers did and didn't see when they went to the home of Atatiana Jefferson's mother dominated trial testimony on Tuesday.

FORT WORTH, Texas - Questions about what the responding officers did and didn't see when they went to the home of Atatiana Jefferson's mother dominated trial testimony on Tuesday.

Intense, extensive body camera video from Dean was played in court showing Dean and Officer Carol Darch along the perimeter of Atatiana Jefferson's home. Dean entered the backyard first and fired a single shot through the window striking Jefferson in the chest.

The defense team has said Dean saw a person in the window with a gun.

Darch: "The only thing I could see was eyes really. I couldn’t make out if it a male or female. I just saw someone in the window, and I saw their eyes."

[ATTORNEY: "How would you describe their eyes?"]

Aaron Dean's police partner discussed what happened in the moments leading up to the shooting of Atatiana Jefferson in 2019.

Darch: "As big as saucers."

Officer Darch was on the witness stand when the video from the open structure call was played.

[ATTORNEY: "You show up, you’re walking up to the house and you see those two doors, the front and the side door open, storm doors shut. What are you thinking?"]

Fort Worth police officer Carol Darch answers prosecutors questions about the shooting on Oct. 12, 2019. Darch says she never saw Jefferson's gun and Dean never announced she had it.

Darch: "When I see the inside?"

[ATTORNEY: "When you’re walking up and you see those doors open."]

Darch: "That it is odd for it to be open that time of night."

The officer testified that things she saw inside the home led her to believe a crime had been committed.

"The cabinets are standing wide open, there were things strewn about. It looked like the house had been burglarized," Darch said.

When recalling Jefferson's nephew, then 8-year-old Zion Carr on the bed, she asked for a break. 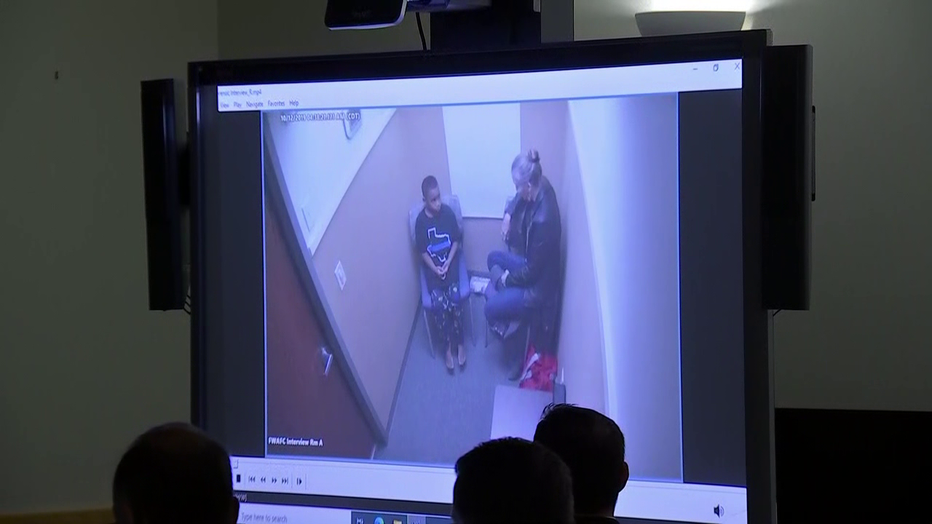 Earlier the jury watched a recording of Zion's interview with a forensic examiner just hours after the shooting. In it, Carr said Jefferson removed a handgun from her purse after hearing something in the backyard, then pointed it at the window.

The defense team argues it differs from his testimony on Monday, when he said she kept the gun to her side.

Before the trial wrapped for the day, Jefferson's neighbor, James Smith, took the stand.

Smith placed a call to police after seeing the door to Jefferson's mother's home open and the lights on.

Smith testified he found it unusual to see two open doors at the house across the street in the middle of the night. He says he went over to the home first to see if something was wrong but then left to go and call police.

"I didn’t know what was going on. It was 2 o’clock in the morning, and I didn’t want to startle her," he said. "I realized that if she’s in the back of the house, and if she had to come from the back to the front, her front door is already open. So that would have been concerning for her for someone to be in her home at 2 a.m. and she not know who it is."

James Smith, who lived across the street from Atatiana Jefferson's mother, talks about the circumstances leading up to his call to the police non-emergency line.

The call was played for the jury.

The jury also heard from former 911 operator Abriel Talbert who took Smith’s call that night and explained why it was classified as an open structure call.

"This isn’t a case that I don't think any of us would want to be a part of," she said through tears.

The prosecution highlighted the fact that dispatched officers do have the option to call back or message the operator to double check certain details.

"In this case, did any of the officers at the scene ever reach back out to you to get any further information?" the prosecutor said.

"I’m unsure about dispatch. Once I hung up with the caller, that was it on my end," Talbert said.

If convicted of murder Dean could face between 5 and 99 years in prison.

FOX 4 will have gavel-to-gavel coverage on Fox4News.com and our YouTube page, plus live updates from the courtroom throughout the day.

The murder trial of former Fort Worth police officer Aaron Dean began Monday with opening statements from attorneys and testimony from Atatiana's 11-year-old nephew, who was in the house on the night of the shooting.

On Monday both the prosecution and defense gave emotional opening statements.

Prosecutor Ashley Deener laid out the state's case with emotion, giving an overview leading up to the single shot that killed Atatiana Jefferson.

"You are going to hear that this was an absolute intentional act, an unjustifiable act that never should've happened," said prosecutor Deener.

Testimony from Atatiana Jefferson's nephew may not matter much, expert says

The first witness in the trial of a Fort Worth police officer accused of murder was a child. Criminal defense attorney Russell Wilson has been following the trial and predicted the now 11-year-old nephew of Atatiana Jefferson would be called to testify. He talked about the inconsistencies in the little boy's story of what happened.

Defense attorney Miles Brisette encouraged jurors to focus on the information Dean had upon his arrival, saying the former officer followed his training.

The first witness called to testify in the trial was Atatiana Jefferson's 11-year-old nephew Zion Carr.

Under cross-examination he showed the jury how his aunt held the gun, saying she did not point the gun at Dean.