Dallas city leaders say nearly 700 people were detained on the Margaret Hunt Hill Bridge during Monday night's protest. Then they were released.

DALLAS - Dallas city leaders say nearly 700 people were detained on the Margaret Hunt Hill Bridge during Monday night's protest. Then they were released.

One person was arrested for having an illegal firearm. Dallas Police Chief Renee Hall says the protesters detained broke the law and will be given "at-large charges" for blocking traffic.

While Chief Hall says protesters were warned not to get on the bridge, protesters say other roadways were blocked and they weren't given any other choice.

Protesters say once they were on the bridge, they were boxed in by police from both sides and had nowhere else to go. It eventually led to hundreds being detained for hours. 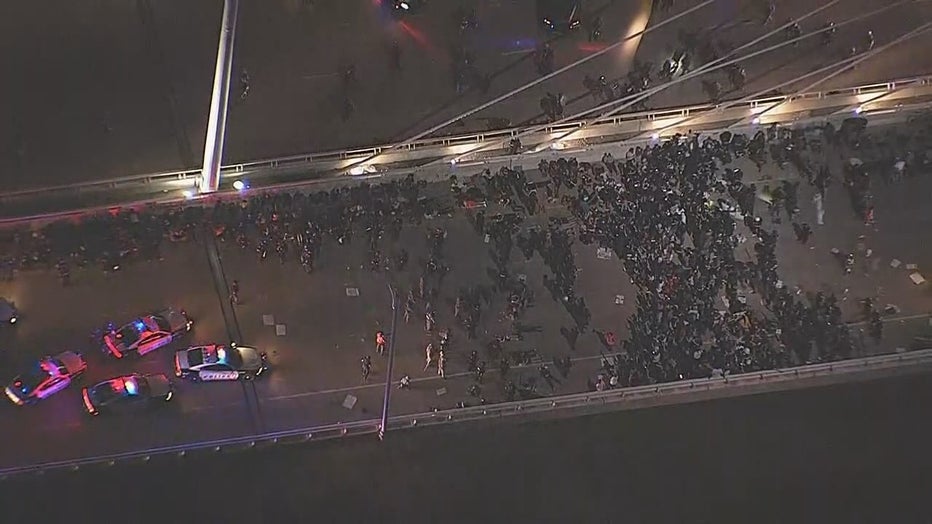 Protesters and police had different descriptions for what took place on the Margaret Hunt Hill Bridge Monday night.

“You could hear them doing the foam bullets, and then they dropped more tear gas,” said Weston Lucas, a protester. “I could hear screaming. Everybody was like, ‘Get down! Get down! Cover your head.’”

“Some would characterize it as chaos.  I would say that it is not true,” Chief Hall said. “That is absolutely not so.”

674 people were detained after what started as a peaceful protest and march down Riverfront Boulevard.

“To the right of us, we had SWAT and cop cars blocking off pass. On to the left, we had like a couple of squad cars,” Lucas said. “But I felt like at this point, I don't feel like we had a place to go. We were boxed in we couldn't go anywhere. So we ended up turning a left onto the bridge.”

Protesters say they heard no commands except to keep moving. But Chief Hall says they were warned about going on the bridge.

“We warned them.  They did not stop.  They decided to take a knee on the bridge and hold their hands up and say don't shoot,” Hall said. “So one should be surprised because my statement is: If you break the law, we will arrest you.”

Police blocked both ends of the bridge. Protesters had nowhere to go.

“And so they advanced on us. We were basically sitting ducks. We were helpless,” said Dede Alexander, another protester. “They did not give any direction. Still, there was no communication. No one said like we're coming to whatever you need to exit, nothing.”

SKY 4 video at one point shows smoke being used by police.

“I'm not sure if it was tear gas or if it was smoke. It was painful. People were hurting,” Alexander said.

Those on the bridge were then detained in zip ties for hours.

Eventually, Chief Hall made the call to collect their information and give them at-large charges for blocking the roadway because of capacity issues at the jail.

“I stood before you and made myself extremely clear that we will arrest anyone who breaks the law,” Hall said. “And, although peaceful, the protesters broke the law.”

Chief Hall went on to say the situation Monday night was constantly changing, and they had to pivot at times.

Some protesters say they plan to take a break from protesting Tuesday after what happened Monday night, but this won't stop them from continuing to show up and protest at other events.

Gov. Abbott meets with leaders in Dallas and Fort Worth to discuss civil unrest