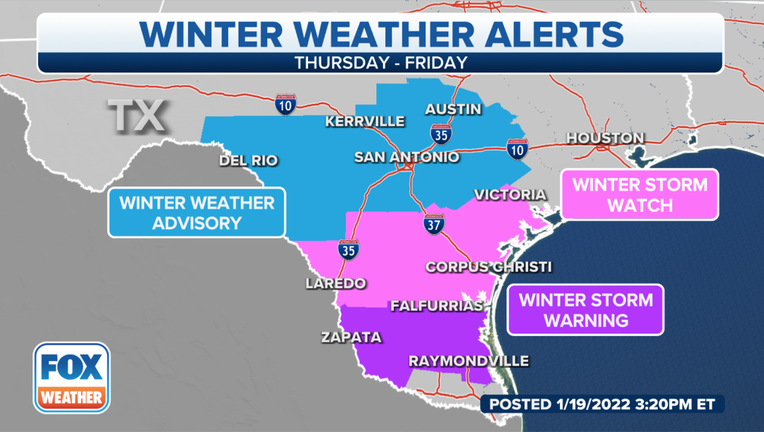 Winter weather could create slick roads across parts of south-central Texas on Thursday.

Cold air will rush in behind a cold front that is expected to produce some severe storms as it crosses Texas on Wednesday. However, a disturbance will move across the region at the same time as the cold air arrives. The extra lift will likely lead to the development of some precipitation beginning Thursday morning in places on the northern side of the Winter Storm Watch area.

Temperatures are expected to be above freezing as the precipitation starts. As the precipitation falls, it will bring down colder air from higher in the atmosphere and allow for a change from rain to a blend of wintry weather. Freezing rain, sleet and snow are all possible inside the watch area.

A wintry mix is possible as far east as areas just north of the Houston metro and even parts of Louisiana. No weather alerts were in effect for those locations as of Wednesday morning.

While accumulations will be highly dependent on where the heaviest bands of this wintry weather occur, up to a tenth of an inch of ice seems possible in some places. This will lead to dangerous driving conditions, especially on elevated surfaces like bridges and overpasses.

It’s been nearly a year since a winter storm moved through south-central Texas. The region was among the places in the Lone Star State that were hit hard by snow, ice and arctic air in February 2021.