The Golden Bears started the game strong and took a 14-0 lead, but Liberty Hill fought back and tied things up just before halftime.

South Oak Cliff then kicked a field goal to go up 17-14 in the fourth quarter, before stopping a fake punt by Liberty Hill, and then scoring a touchdown to win the Class 5A Division II state championship game.

South Oak Cliff High School senior Qualon Farrar gave his team a 23-14 lead with a touchdown with three minutes left in the game. It was then that everyone knew a state title was theirs.

"It felt like greatness. If felt like I was the greatest in the world," Farrar said. "We won. Right when I got in the end zone, we won." 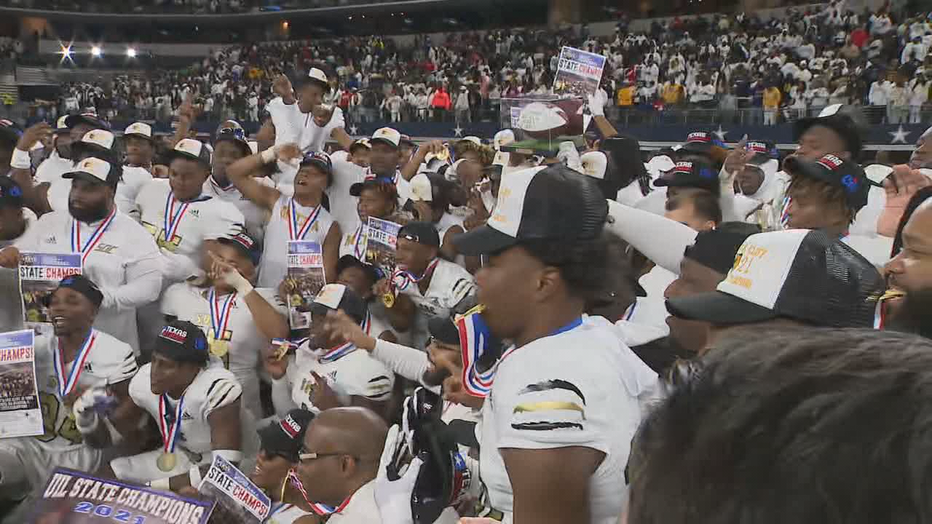 South Oak Cliff fans took over AT&T Stadium with graduates from many different classes. They cheered as one.

"It’s good to see everybody come together and join forces as a unit," one fan said.

Barely four years ago, the campus was physically in disrepair, with leaking ceilings and rodent problems. Things turned around quickly following a $52 million renovation that brought new life and hope to the SOC faithful.

"We fought for equity, and this is what it brings to our community," Johnson said.

And even ones new to the area, like Dallas Chief of Police Eddie Garcia, feel the significance.

Now, South Oak Cliff players, students, and alumni will celebrate more than they have in decades.

There will be a celebratory parade on Tuesday, Dec. 21, starting at 11 a.m.

The last Dallas ISD high school to win a UIL title was Sunset High School in 1950.

And then, of course, there was the 1988 Dallas Carter team made famous by the Friday Night Lights book and subsequent movies and TV shows.

That Carter team did win the championship game, but had their title stripped over a grades scandal.