The coaches said the players are calm, but the atmosphere surrounding the thought of a possible state title is electric.

Escorted by Dallas police, the team made the trip from Dallas to Arlington in anticipation for Saturday’s 5A state championship game at AT&T Stadium.

The school also held a pep rally as the South Oak Cliff players loaded up onto buses.

This will be South Oak Cliff’s first ever state championship appearance and could be the first Dallas ISD team to win a state title in more than 60 years. 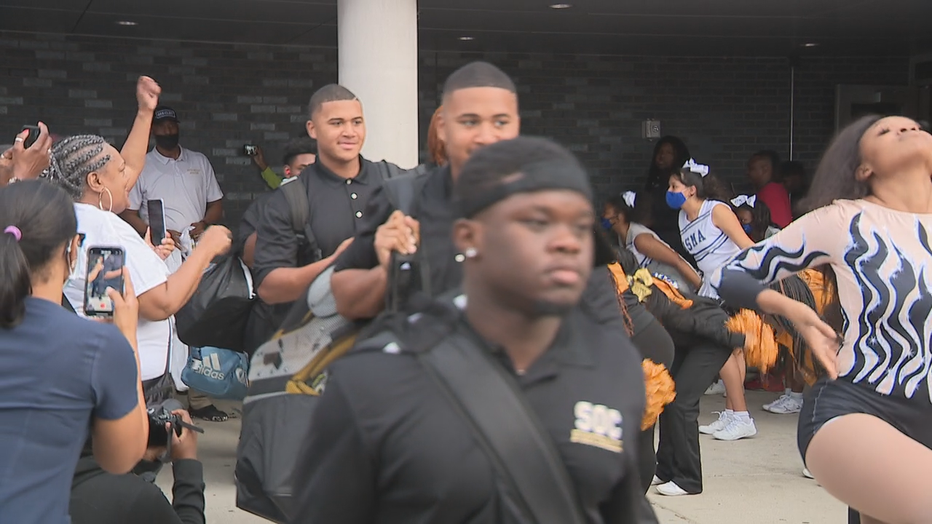 "So, so, so proud. So, so proud. Pride is really an understatement," said Angela Smith, whose son plays on the team. "I really can’t express how exciting it is for them to have this opportunity to play actually in the Cowboys stadium. It’s so exciting."

A moment the team and their families have been dreaming about.

"I did not birth losers, only winners," Smith added.

It was a moment Smith wasn’t going to miss.

Smith drove nine hours from Mississippi to watch her twin boys, Jordan and Jaden Rowe, play under the lights at AT&T Stadium.

Both already have offers from Georgia Tech.

Defensive line coach Michael Traylor said the team has been focused all season on and off the field.

"The want to and the drive to go to college is even higher now," he said.

Every senior on the team has a GPA higher than 3.2.

And several of the players landed spots on the honor roll, launching some to scholarships Division I schools.

"It doesn’t matter where you go to school," Traylor said. "If you are pushing academics, academics can take you a long way."

This season, South Oak Cliff alum Teresa Steward has been there every step of the way.

"Get ready for the showdown of the century," she said.

The class of 1979 graduate plans to be in the stands Saturday with a good luck charm.

Even though she said she already knows what the scoreboard will look like.

There will be a free watch party at Ellis Davis Fieldhouse for those who can’t attend the game.