DALLAS - Everybody loves a good comeback.

"[I] believe that I still am one of the better guys at my position playing college football," said Calcaterra. "I want to play in the NFL and I want to be the best at my position."

But Calcaterra’s comeback is more complicated than most – returning to a sport he’d given up in November of 2019.

That’s when at the age of 20, Calcaterra announced in a Twitter video his retirement from the Oklahoma Sooners, and the game of football, because of multiple concussions.

"Over a month ago I received a concussion in practice," said Calcaterra in the video. "What most of you may not know is I’ve had my fair share of concussions in my career. I spent countless hours visiting with OU medical professionals and specialists around the country. Ultimately we came to the conclusion that it would be best for me to step away from the game." 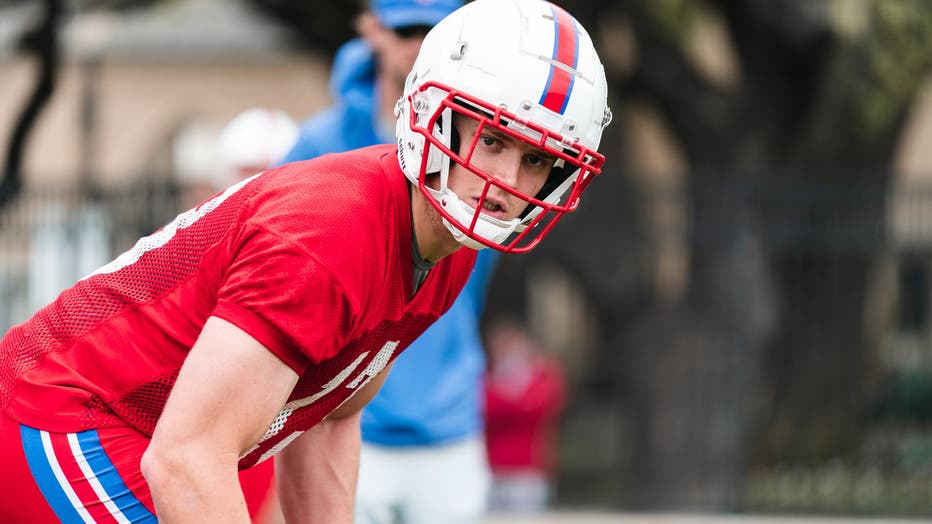 So did he ever really feel like football was 100% over for him?

"Yeah I did. I fully was content with my decision to step away and I never thought that I would come back and play," he said.

In August of 2020, Grant was on the brink of a new journey – to become a firefighter in his home state of California. He accepted a job as an EMT with an ambulance company. But on the eve of his first day of work, Calcaterra realized he had unfinished business on the football field.

"I never wanted to have it be five years down the road and always wonder, ‘What if?’" said Calcaterra.

So he returned to the game and decided to do it at a new school – ultimately picking the Mustangs.

After getting clearance from multiple doctors, including medical staff at SMU, he was back in action.

"I’ve been in this violent game my whole life," said Calcaterra. "I expect to get hit again, and I’m ok with those consequences."

As for how many concussions grant has had? He doesn’t have a count.

He knows he sustained at least a few at Oklahoma and that there’s no way to fully eliminate the risk of getting another one at SMU. If that happens though, Grant hopes some specific training he’s incorporated into his routine will lessen the severity and the impact it has on his health.

"A bunch of different exercises that basically make you dizzy with the hopes that doing them a lot you’ll kind of have a positive response to being in situations like that," said Calcaterra.

Calcaterra wasted no time sprinting across the middle of the field in SMU’s season opener to catch the Mustangs’ first touchdown pass of the fall – a strike from quarterback Tanner Mordecai, another former Oklahoma Sooner.

For Grant, it was his first touchdown grab in 1,009 days.

"It was really exhilarating," said Calcaterra. "It was just so much that I’d been through, so much work that it took to step away and just as much work to get back to where I was and be the player I know I can be."

"I put a lot of time and effort into it and experienced a lot and just kind of let it all out."

Grant’s comeback may not make sense to some, but it’s the only thing that makes sense to him.

Whatever chapters come next, SMU’s new tight end is at peace with choosing to see his football story play out.

"I just have an extreme passion for the game and I know, just like a knee injury, it’s going to have an effect on me later down the road," said Calcaterra.

"I just love playing football and I’m going to give it my best shot and deal with what happens later."