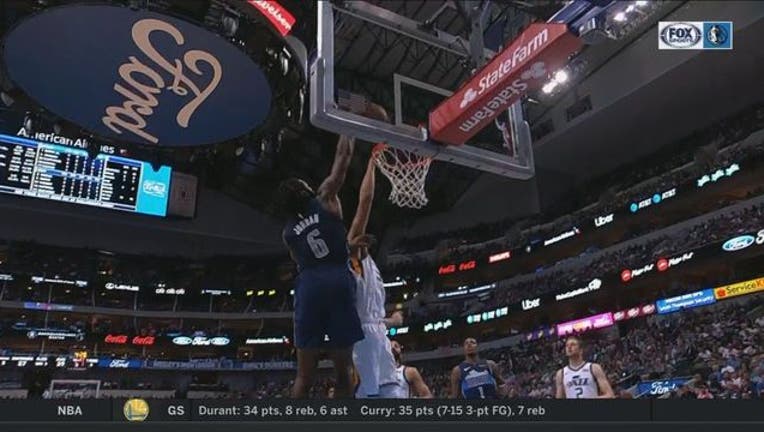 DALLAS (AP) - It's something special when Utah's Rudy Gobert and Dallas' DeAndre Jordan face each other.

Centers Gobert and Jordan recorded their sixth straight double-doubles in six games this season, but it was the Jazz who emerged with the win, defeating the Mavericks 113-104 in a sloppy game Sunday night.

Gobert finished with 23 points and 16 rebounds, and Jordan added 12 points, 4 for 4 from the line, 19 rebounds and a career-high nine assists.

"Any time you play against another top center in the league, I'm sure it's going to be a challenge," Jordan said. "But it's fun, I'm a competitor and I'm sure he is too."

Any rivalry between them is not bitter.

"It's friendly," Jordan said. "We're always going to talk smack, but you know it's just part of the game."

Gobert has had his way with the Mavericks in the past but noticed a difference since Jordan arrived in Dallas this season from the Clippers.

"It makes a big difference when you have a guy that can rebound, that can protect the basket," Gobert said. "He brings a lot of attention when he runs to the basket, so I think it changes the team for sure."

The Jazz overcame 18 turnovers and won going away after taking a five-point lead, 82-77, into the fourth quarter.

Jazz coach Quin Snyder said his team doesn't rely on any one player.

Dennis Smith Jr. kept Dallas in the game with strong second-half shooting, going 9 for 12 from the field, including 7 for 7 with two 3-pointers for 16 points in the third quarter. He had 21 of his game-high and career-high-tying 27 points in the second half.

Jordan explained how he could have three more assists than his previous high total.

"I'm up there at the top of the key a lot trying to make plays. Wes and Dennis and Harrison (Barnes) do a great job of cutting and it was easier to find those guys today."

In contrast, the Jazz were 11 for 16 (69 percent) from the field in the second quarter. Nine Utah turnovers in the quarter helped Dallas stay within 50-46 at halftime.

Despite Smith's 16 points in the third quarter, the Jazz outscored Dallas 32-31.

Jazz: F Derrick Favors did not play because of a sore left knee. ... Jae Crowder left the game after rolling an ankle. X rays were negative. ... Second-year F Georges Niang had a career-high 13 points. Rookie Grayson Allen tied his NBA high with 11.

Mavericks: PG Dennis Smith Jr. returned after missing a game with a sprained right ankle. ... G Devin Harris missed his fifth straight game because of a strained left hamstring. Coach Rick Carlisle said Harris could return to play on Wednesday against the Lakers.

Jordan, a career 45-percent free throw shooter, made all four attempts against. Utah, and is 26 for 30 (87 percent) this season. When he goes to the line now, he talks to the player lined up to his left, and then to his right, before shooting as a technique to relax and improve his concentration.

Eight players tied for the scoring lead in the first quarter. Five Utah players and three Mavericks each scored four. At halftime, Jazz G Donovan Mitchell was the only player in double figures.

Jazz: Complete a four-game trip on Wednesday at Minnesota

Mavericks: Begin a two-game trip at San Antonio on Monday.