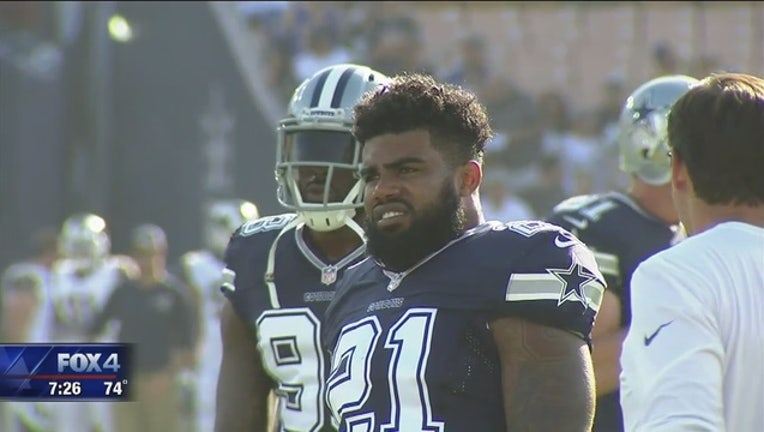 The Cowboys played an exhibition game over the weekend but the big news was Ezekiel Elliott’s penalty that was handed by NFL Commissioner Roger Goodell on Friday.

Elliott and his legal team are now planning to appeal his six-game suspension. It will likely be filed by the end of the day Tuesday and then the NFL will have 10 days to rule on that appear. The same person who handed down the penalty will get to decide if that penalty should be reduced as a result of the appeal.

FOX 4 Sports’ Mike Doocy said there’s a chance it could go down from six games to four. There is some precedent for that.

Goodell came down pretty hard on Elliott even though no legal charges were ever filed in the case. Elliott’s former girlfriend accused him of domestic violence a year ago. The NFL investigation found evidence that he did abuse her on three occasions.

After the game, one player whose childhood was affected by domestic violence spoke out about the suspension.

“You grab a teammate and you support them in ways but that doesn’t mean you come off of your standard of what you stand for. And so I’m confident in that because, you know, look it’s been my life in a lot of ways. So I don’t take that lightly and quite frankly it’s uncomfortable that we’re even having the conversation right now. But you go through it and you’re in a position to be a leader and you continue to show the way,” said Cowboys tight end Jason Witten. “I know it’s been a tough year on him. I think that his mindset has been such that what he said is what has already been released. I think that it’s a pretty good perspective of what he’s trying to do moving forward.”

Even though Cowboys owner Jerry Jones repeatedly said he didn’t think Elliott would be suspended, Coach Jason Garrett said he was prepared for the worst.

“We suspected that something like this might happen and we prepared our team accordingly by building it the right way. And we’re going to focus on what we can control within our football team. That’s players and coaches. We’re going to coach as well as we can and play as well as we can with the guys that we have available to us,” Garrett said.

“You know, there’s nothing we can do. We can talk about it or we’re concerned about it or think something was fair or whatever. We’re focused on the wrong stuff. We’ve got to focus on what we can control which is getting ready to play this next preseason game and getting ready for some games without him,” added Scott Linehan, the Cowboys offensive coordinator.

The reason the Cowboys have kept so many veteran running backs on the roster was because as Garrett said they knew that this might happen. They still have Darren McFadden who ran for 1,000 yards two years ago and Alford Morris who is a former pro-bowl runner with Washington.

The Cowboys also signed Ronnie Hillman, a versatile runner in the preseason who had some good years in his own right.

Doocy thinks with the offensive line the team has they’ll probably be okay with Elliott for a little while. Their offense has some injury problems but that’s a different story.

As for the penalty, Doocy said he still doesn’t think it is fair compared to some of the other penalties. A kicker named Josh Brown admitted he systematically abused his wife was only suspended for one game. Tom Brady got four games for using deflated footballs.

“I don’t know where the consistency is here,” he said.

Ben Roethlisberger was accused of sexual assault many years ago and charges were never filed. The initial penalty was six games and it was later knocked down to four. Doocy thinks that’s a definite possibility with Elliott.

“If he’s innocent for his sake I hope it comes out during the appeals process. And his lawyers claim that it will and there are enough inconsistencies in the evidence. But if he’s not innocent I hope that Elliott just takes the penalty and realizes how lucky he is that the only price he’s paying is six games away from playing in the NFL and that this serves as a wakeup call to never put himself in this situation again,” Doocy said.