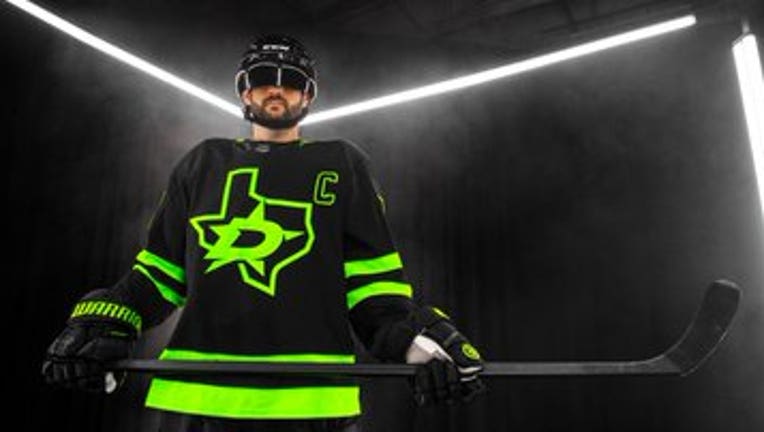 DALLAS - As Dallas Stars fans are still thinking about the team’s run to the Stanley Cup Final, they were given a treat Wednesday, as the Stars unveiled a new Blackout alternate uniform for the upcoming season.

This will be the first time since 2006 that the Stars will enter the season with three uniform options.

The Stars said this is a return to the team’s roots, as it re-establishes black as a primary jersey color, which the team had during its first 20 years in Dallas.

The new black jersey features Skyline Green, which was inspired by the city of Dallas and its iconic skyline.

The jersey will also have the State of Texas mark on the crest of the sweater.

"The jersey design committee was tasked with finding a way to incorporate the heart of the city of Dallas and the spirit of Texas into a uniform," Dallas Stars President and CEO Brad Alberts said in a statement. "Today is an exciting day as we have worked hard over the last two years at creating a third jersey that will make our fanbase proud, and with the help of adidas Hockey, we feel like the Blackout third jersey will do just that. The Dallas skyline is iconic and introducing Skyline Green into our uniforms is a vibrant reminder our great city."

The jersey will go on-sale at The Hangar locations in Frisco and Victory Park starting at 9 a.m. Thursday, Oct. 29.