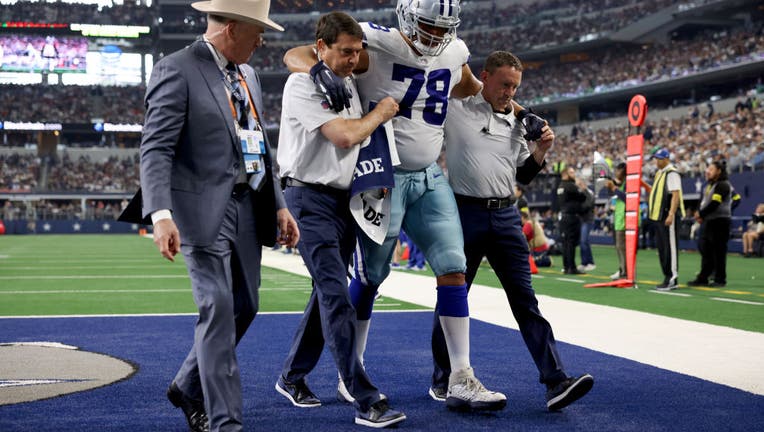 ARLINGTON, TEXAS - DECEMBER 11: Terence Steele #78 of the Dallas Cowboys gets helped off the field in the first half of a game against the Houston Texans at AT&amp;T Stadium on December 11, 2022 in Arlington, Texas. (Photo by Tom Pennington/Getty

ARLINGTON, Texas - The Dallas Cowboys have lost starting right tackle Terence Steele for the rest of the season.

Steele suffered a torn ACL and MCL during Sunday's win over the Houston Texans.

A defender collided into Steele while he was making a block.

Steele has started every game this season and 40 of 45 games for his career after joining the team in 2020 as an undrafted free agent.

It is a huge loss for the offensive line that has stayed pretty healthy this season since losing tackle Tyron Smith in training camp.

"Terence Steele is just a rock of a man," said Cowboys head coach Mike McCarthy on Monday. "He's been so consistent. Obviously it is going to be a loss for us. I just can't say enough about him as a person, his work ethic, the way he goes about it. A true pro, beyond his years, as far as a third year player. Obviously disappointed to see what he's going through.

Steele is the second Cowboys starter to be lost for the season. Corner Anthony Brown tore his Achilles in the Colts game.

McCarthy said he was comfortable working the rotation between Josh Ball and the 40-year-old veteran Jason Peters.

Peters hadn't played right tackle since 2005, but filled in on the 98-yard game-winning drive.

The Cowboys (10-3) also hope to have Tyron Smith return for this Sunday's game in Jacksonville against the Jaguars (5-8).