Wreaths Across America: 50,000 wreaths to be placed on graves at Dallas-Fort Worth National Cemetery

More than 2.4 million veterans across the country will be honored and remembered Saturday as a wreath is laid at their gravesite on National Wreaths Across America Day.

DALLAS - More than 2.4 million veterans across the country will be honored and remembered Saturday as a wreath is laid at their gravesite on National Wreaths Across America Day.

That includes more than 50,000 veterans laid to rest at the Dallas-Fort Worth National Cemetery.

It all started with two parents wanting to honor their son 13 years ago.

It is a massive endeavor of placing a wreath on each of the 50,508 graves at the Dallas-Fort Worth National Cemetery. 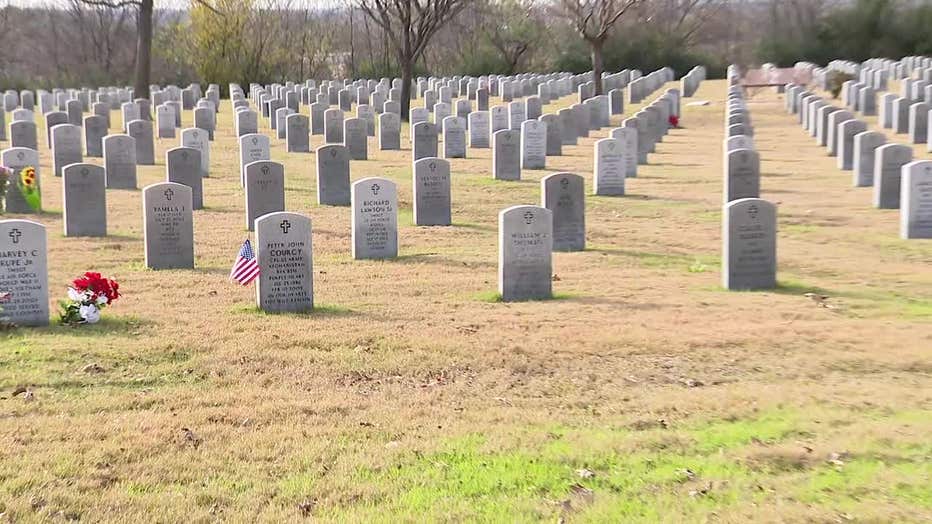 This will be the third year that there are enough wreaths to be placed at every veteran's grave, but it did not start out that way.

People who don't have someone laid to rest at the cemetery willing to come out and honor our military men and women laid to rest here.

Wreaths Across America seeking donations, volunteers ahead of their event in December

Chris and Mary Bush began raising funds for the wreaths after their son, Corporal Peter John Courcy, was killed in action in Afghanistan on Feb. 10, 2009.

The Bush family say the wreaths do far more than remember and honor America's heroes; they also teach the next generation.

"We will have a lot of kids out here. Parents will help them along," Chris said. "We ask them to read the name and go home and learn about a person."

"It’s a way we can teach the young children what it means to have the freedoms we have here in America," Mary said.

And while donations for the $15 wreaths were initially down this year with inflation and looming concerns about a recession, people showed once again that they could make a small financial sacrifice for those who paid the ultimate price.

The public is invited to attend Saturday's ceremony at the Dallas-Fort Worth National Cemetery.

First, family members will lay wreaths followed by the public. Children are encouraged to attend.