Woman struck by stunt drivers in Fort Worth says she was stuck in traffic, went to help someone else

A woman who was struck by a vehicle during a ‘stunt driving’ takeover in Fort Worth said she was not there as a spectator.

FORT WORTH, Texas - A woman who was struck by a vehicle during a ‘stunt driving’ takeover in Fort Worth said she was not there as a spectator.

Someone recorded cell phone video of the stunts at University and White Settlement Road early Sunday.

On Wednesday, police provided a view from a city camera, hoping for tips on the drivers and vehicles involved. 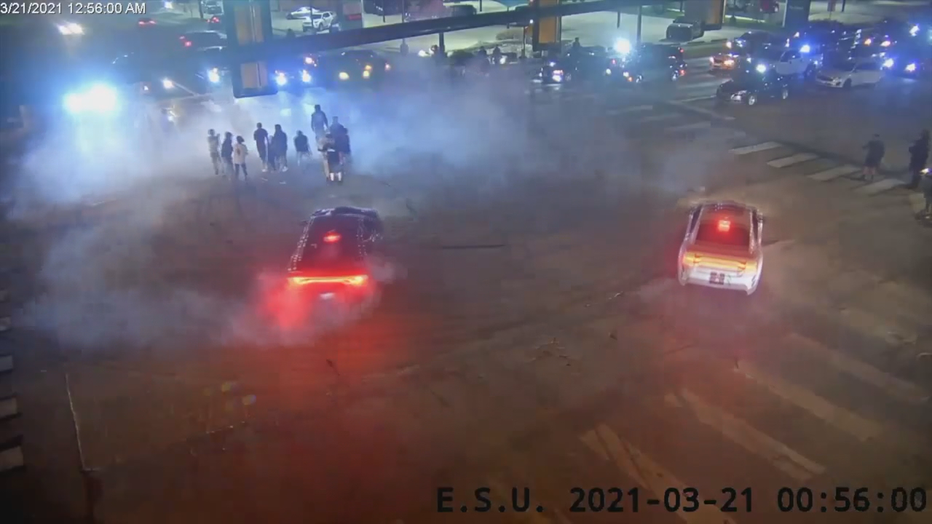 A daunting look as a woman was struck by one of the vehicles.

FOX 4 spoke with that woman, who asked us not to show her face or use her name out of safety concerns.

"I felt pain in everything from my ankle, up my leg. I didn't know if my leg was going to give out," she said. "I most certainly, my brain kept saying, ‘Don't go down, don't go down.’"

She said she got out of her vehicle, which was one of those held at bay at a stop light, to assist a stranger who had been hit by one of the vehicles moments before.

"I had no affiliation to anybody in that group. I'm not friends, I definitely do not condone or participate in this behavior, and I explained that to the officers that night," she added.

Police confirmed that the woman gave those details to officers while she was being treated for her injuries.

She also explained that it felt safer being around people, and that’s why she’s seen continuing toward the crowd of spectators after she was hit.

"It was very disorienting with all that smoke and multiple cars," she explained. "You had to make a split second decision and your brain is doing the best it can. Again, it's trying to track the crowd, the cars, the center, and in the beginning, I'm still looking for this other person. That had been [struck] and had been possibly seriously injured."

The police investigation is ongoing, primarily to locate the reckless drivers, who at one point have someone standing up through a sun roof.

"In my mind going, back and forth, why did I do that? That was stupid, but again, I’m the type of person I just can’t witness wrongdoing, someone needing help and not doing it," she said.