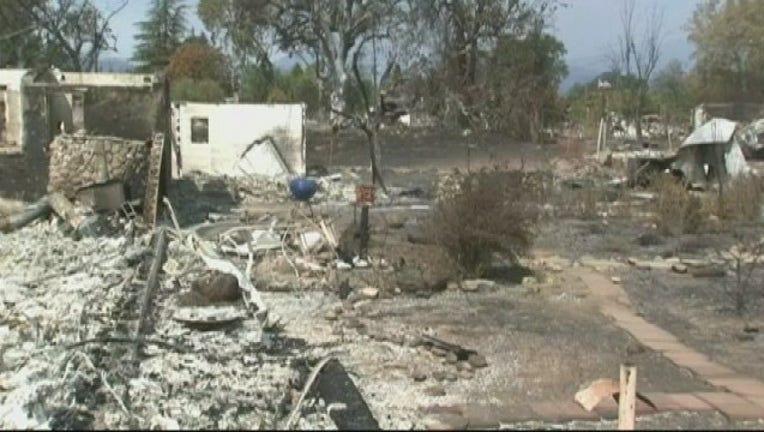 MIDDLETOWN, Calif. (AP) — Ranch managers Don and Martha Grimm barely escaped with only the clothes they were wearing as a destructive, fast-moving fire roared toward their Northern California home.

The couple, both in their 70's, held hands as they returned to their neighborhood to find only rubble where their home once stood. Martha Grimm broke down in tears.

"We didn't have a chance to react. It was here and we got out with the clothes on our back. All of our memories, everything is gone," Martha Grimm said.

Like the Grimms, some residents cried as they walked through the rubble of their homes while others shared amazing stories of survival when more people returned to their houses Tuesday and surveyed the twisted metal and smoking ruins left behind by a devastating California wildfire.

Don Grimm said he was surprised to find the ranch's chickens, horses and llamas survived the fire. But 10 sheep in a barn didn't make it.

Aided by drought, the flames have consumed more than 109 square since the fire sped Saturday through rural Lake County, less than 100 miles north of San Francisco. Cooler weather helped crews gain ground and the fire was 30 percent contained Wednesday. Heavy rain was falling in the area Wednesday morning.

A 69-year-old man whose home in the small town of Anderson Springs was destroyed has been reported missing by his family.

The San Francisco Chronicle reports that authorities said Leonard Neft's burned car was found Tuesday evening on the route he would have taken to try to escape.

Neft, a former police reporter for the San Jose Mercury News, last spoke with his family on Saturday evening, as the fires swept through the area.

His wife, Adela Neft, told the paper she repeatedly called her husband Saturday to tell him to leave, but he said he didn't think the fire was coming toward him. Authorities say cadaver dogs will be sent in to search.

Rancher Lisa Comstock said she and her three dogs survived the raging fire in rural Middletown by jumping into a water trough as flames neared her home.

Comstock was also able to keep her horses nearby as the fire burned around them.

"The flames were coming over that mountain and surrounding this place like there was no tomorrow," she said. "I jumped in the water trough with all the dogs, and the horses came up around. Thank God they just stayed here."

At one point she was sure she wasn't going to make it but talking to her animals helped her and the animals keep calm.

"If this is how I go, I'm not leaving these animals. That's all I could think of," she said.

The cause is unknown, but officials with the California Department of Forestry and Fire Protection spent Tuesday surveying a burned-out shed next to a two-story home in the community of Cobb, the San Francisco Chronicle reported.

The house was unscathed, but the fire had charred a hill south of the home after possibly igniting in or near the small shed, the newspaper reports.

Authorities say 585 homes were known to be destroyed, and the number was expected to increase. Another 9,000 structures remained threatened.

The Lake County fire and another blaze about 120 miles to the southeast have displaced 23,000 people and were the worst of a dozen wildfires burning in the state. The Lake County fire spread into northern Napa County, but the region's famous wine valley was not threatened.

The utility companies were trying to restore power to the area and water was flowing in some areas of town.

One person has been confirmed dead, and others were unaccounted for, but authorities said they could be staying with relatives, on vacation or elsewhere and not impacted by the fire.

The dead woman has been identified as Barbara McWilliams, 72. She told her caretaker she didn't want to leave her home near Middletown. The world traveler and sharp-minded woman with advanced multiple sclerosis said she would be fine.

Her body was found Sunday in her burned-out home after flames kept Lake County sheriff's officials from reaching her.

Lake County has been particularly hard-hit. In late July, a wildfire east of Clear Lake destroyed 43 homes as it spread across more than 100 square miles. Another fire erupted Aug. 9 several miles from the community of Lower Lake.

A separate destructive wildfire burning less than 200 miles away in the Sierra Nevada had destroyed at least 233 homes. The number of homes destroyed in a Sierra Nevada wildfire in Amador and Calaveras counties has risen to 135, up from 81. The blaze in Amador and Calaveras Counties has charred more than 112 square miles and was 40 percent contained on Tuesday. It is still threatening another 6,400 structures.

East of Fresno, California's largest wildfire had moved away from the Sierra Nevada's Giant Sequoia trees, some of which are 3,000 years old.