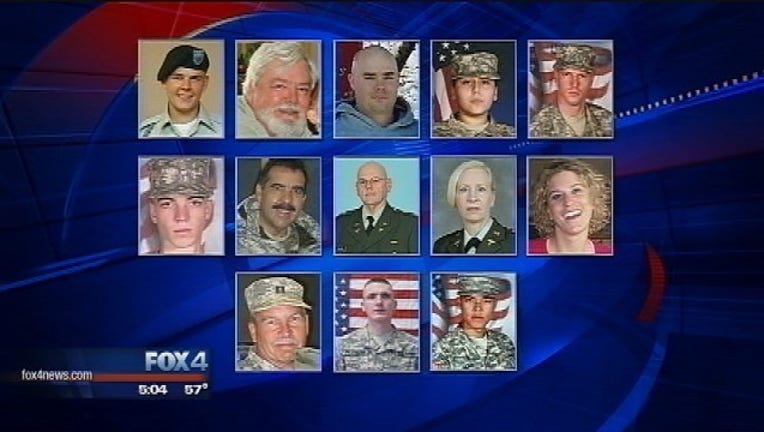 Purple Hearts will be awarded to victims of the shooting rampage at Fort Hood that left 13 people dead and more than two dozen wounded in 2009, the Army said Friday in a decision that many said was long overdue.

The honor is bestowed on troops wounded in battle, but it also means that combat-related services and increased retirement benefits will be available to victims. Many people wounded in the attack at the sprawling Texas military base have lingering injuries and have struggled to find work after leaving the military.

The Department of Defense had previously denied the award to Fort Hood shooting victims, calling the November 2009 attack an act of workplace violence, not terrorism. But in a letter addressed to Congress, the Army said the circumstances of the mass shooting meet new criteria for the award.

The initial denial angered victims who noted that the convicted gunman, then-Army psychiatrist Nidal Hasan, said he was inspired by al-Qaida and an anti-American cleric. Hasan has said he attacked unarmed soldiers preparing for deployment to protect Muslim insurgents from American attacks abroad.

"For five years, the White House and the political echelon at the Department of Defense pushed the workplace violence line. And it's a lie," said Reed Rubinstein, an attorney for some of the victims. "To admit the truth -- that it was a terrorist attack by a jihadist -- is a small but important first step toward making the victims whole."

New criteria outlined in the 2015 National Defense Authorization Act include attacks on service members by foreign terrorist organizations. With the criteria retroactive to September 11, 2001, the Department of Defense is reviewing other potentially qualifying incidents, the office of Army Secretary John McHugh said in the letter to Congress.

The legislation requires that an event be considered an attack by a foreign terrorist organization if the perpetrator was in communication with such a group ahead of the attack or if it was motivated by an allegiance to the group.

"Now that Congress has changed the criteria, we believe there is sufficient reason to allow these men and women to be awarded and recognized with either the Purple Heart or, in the case of civilians, the Defense of Freedom medal," McHugh said in a news release Friday. "It's an appropriate recognition of their service and sacrifice."

Federal officials have called Hasan a homegrown violent extremist, and the FBI has released emails Hasan exchanged with an anti-American cleric who was later killed by an American drone strike in Yemen. Hasan is currently on death row at Fort Leavenworth in Kansas.

Howard Ray, a retired U.S. Army sergeant who survived the Fort Hood attack, said the legislative effort was pushed by survivors and victims' family members. Now a graduate student in criminal justice, the 34-year-old said he hopes to one day craft legislation "to help soldiers to not have to deal with something like this ever again."