Families of the Uvalde school shooting victims are becoming more prominent gun control activists with urging and support from the state Democratic party.

The Texas Democrats hosted a news conference in Uvalde with several families days after some of them endorsed Beto O'Rourke in the governor's race.

The stories they tell are deeply personal.

But opinions will be hard to change, with polls showing a clear divide between Democrats and Republicans on gun control.

More than four months after the Uvalde school shooting, the sorrow and grief felt by the families is still "very raw."

Many of them spoke Wednesday, as families are demanding a leadership change.

They believe Governor Greg Abbott has failed them.

"This building is a little hard for me to come back to, it's a little hard. For these families, it’s going to be hard," said State Senator Roland Gutierrez (D) SD-19, who represents Uvalde.

Uvalde family members returned to the city's civic center for the first time since May 24.

On that day, it was set up as a reunification center after an 18-year-old man, armed with an AR-style rifle, entered Robb Elementary School and opened fire.

For 21 families, that reunification never came.

Rubio's daughter, Lexi, was among the 19 students killed.

Relatives of victims, including two teachers, took part in a news conference Wednesday put on by the Texas Democrats. 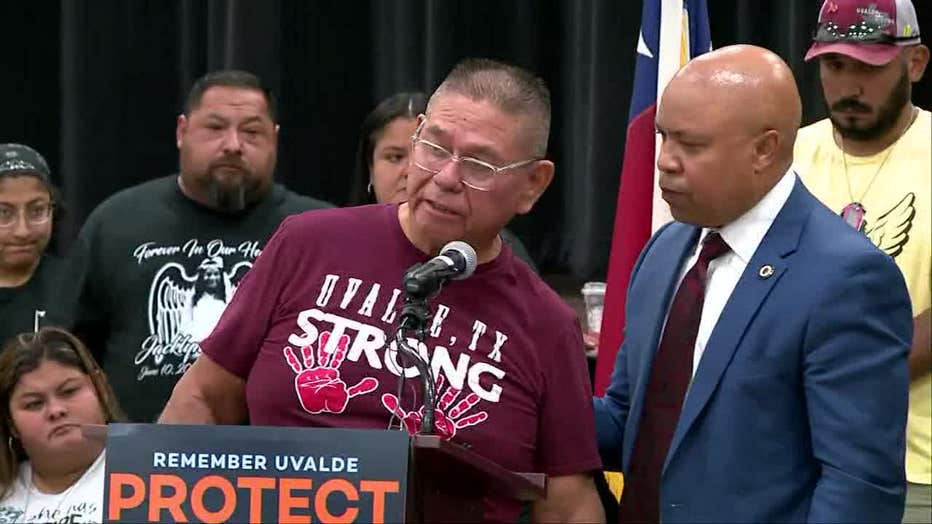 "Losing Irma the way that we did was unimaginable and devastating," said Marissa Lozano, whose sister, Irma Garcia, was killed.

They carried signs and wore shirts of loved one lost.

"When they finally came in to rescue us and the man said, ‘If you're alive, please talk now,’ I was the only one that talked that day because we were neglected for 77 minutes," Reyes said.

The group is demanding the state pass stricter gun laws for rifle purchases.

"Raise the age from 18 to 21. It’s simple, that's not much to ask. Background checks, red flag laws," said Jacinto Cazares, whose child, Jackie Cazares, was killed. "It’s been done before, you know, Florida did it in almost a month."

Cazares is referring to the school shooting in Parkland, Florida in 2018.

In the aftermath, Florida lawmakers strengthened gun control laws, making it illegal for most Floridians under the age of 21 to purchase a gun.

"That shooter should never have had those weapons in the first place," she said.

In a press release on Monday, Gov. Abbott's staff listed other actions the governor has taken since the Uvalde shooting, including his pledge of $105.5 million to "enhance school safety and mental health services" in Uvalde and across the state.