The debate at the University of Texas Rio Grande Valley in Edinburg kicked off with a discussion on immigration, which consistently ranks as one of the top issues for Texas voters.

The debate at the University of Texas Rio Grande Valley in Edinburg kicked off with a discussion on immigration, which consistently ranks as one of the top issues for Texas voters.

Abbott touted the $4 billion the state has allocated toward border security, including funding to deploy thousands of National Guard troops and Department of Public Safety troopers to the southern border to apprehend the large number of migrants crossing into the state. But he noted that the state shouldn’t be paying any money because the federal government should be stepping up to secure the border.

"What we’re doing is making sure that we are keeping our community safe, and this is completely different than the way things would be under Beto because he said months ago, ‘There is no problem on the border.’ He said that he would reduce immigration enforcement," Abbott said. 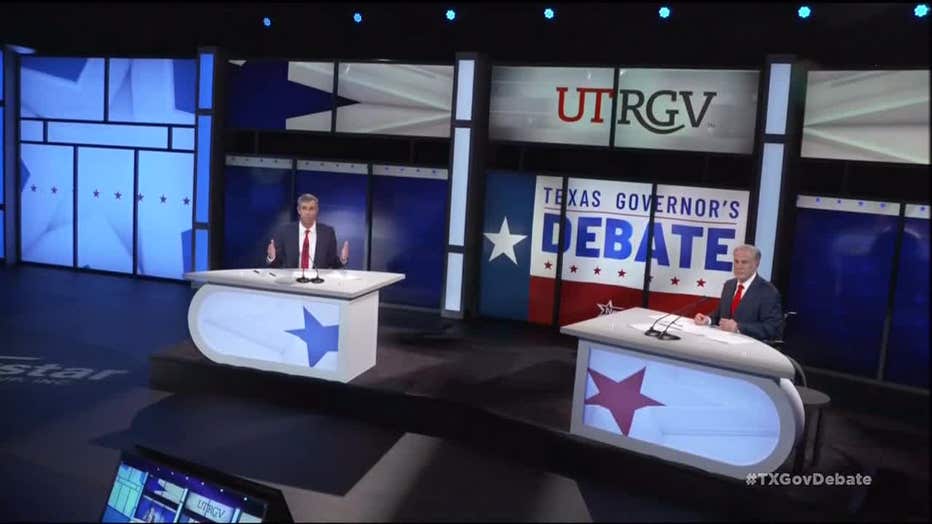 Abbott also blamed Democratic President Joe Biden for the large number of migrants trying to cross into the country through the Texas-Mexico border.

O’Rourke immediately went on the attack, saying Abbott was trying to deflect the blame on immigration as he would on other issues. He noted that Abbott’s expensive border mission has not had the impact of deterring border crossings.

"What we just heard from the governor is what we’re likely to hear over the course of this debate," O’Rourke said. "He’s going to blame people like President Biden. He’s going to try to lie about my record, and he’s going to distract from his failures, whether it’s his failure to keep the lights on in the grid, his failure to address school shootings or his failure in immigration."

O’Rourke said the Texas needs a "safe, orderly path" for migrants crossing the border that reflects the values and interests of the state.

The two candidates also clashed over the busing of migrants to Democrat-led cities like New York City and Washington, D.C., with Abbott questioning why O’Rourke did not criticize the busing of migrants by El Paso, his home city. O’Rourke said the two programs were completely different. (El Paso coordinates with the cities it sends migrants to, and Democratic mayors said Abbott refuses to give them any notice.) O’Rourke said Abbott was comparing "apples to oranges."

Greg Abbott and Beto O'Rourke touched on abortion, gun control and the Texas power grid during their debate on Friday evening. SMU political science professor Cal Jillson was taking notes throughout the debate. He shared his analysis with Good Day.

Gun control measures were also a major topic of conversation following the deadly shooting of 19 children and two teachers at a Uvalde elementary school in May.

Hours before the debate, a group of about 35 family members of the victims of the Uvalde shooting held a news conference with O’Rourke, announcing their support for him. They criticized Abbott for not taking action after the shooting and for refusing their call for the governor to call a special session to change gun laws to raise the legal age for purchasing an assault rifle from 18 to 21. Abbott has said he believes such a change to the law would be unconstitutional given recent court rulings.

At the debate, Abbott reiterated that he opposed the change in law "purely from a legal position" and said other states that had passed such laws — like Florida — would have to deal with legal battles. Abbott also said he remained opposed to red flag laws because they would deny "lawful Texas gun owners their constitutional right to due process."

The Uvalde families have also called for the passage of red flag laws, which allow judges to temporarily seize firearms from people who are deemed dangerous.

Disclosure: The University of Texas Rio Grande Valley has been a financial supporter of The Texas Tribune, a nonprofit, nonpartisan news organization that is funded in part by donations from members, foundations and corporate sponsors. Financial supporters play no role in the Tribune’s journalism. Find a complete list of them here.

This article originally appeared in The Texas Tribune at https://www.texastribune.org/2022/09/30/texas-governor-debate-greg-abbott-beto-orourke/.