The police chief for Uvalde CISD was fired for his role in the failed law enforcement response to the shooting at Robb Elementary in May that resulted in the deaths of 19 students and two teachers.

UVALDE, Texas - The police chief for Uvalde CISD was fired for his role in the failed law enforcement response to the shooting at Robb Elementary in May that resulted in the deaths of 19 students and two teachers.

Before the district's decision, his lawyer sent a fiery statement to the media, calling the treatment of his client "illegal."

And while the board met in private, the young victims' families shared emotional stories of their loss.

Pete Arredondo didn't attend, and there were shouts of coward that came from the crowd Wednesday night. 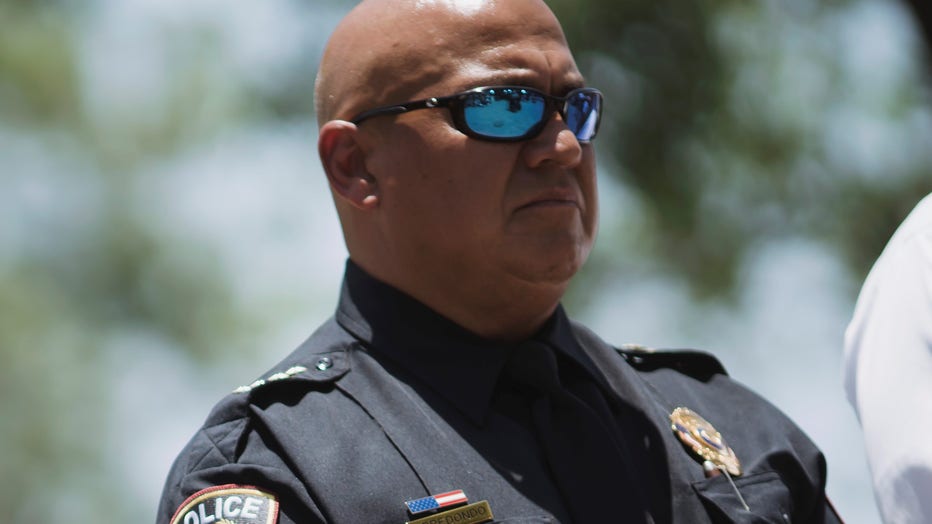 UVALDE, TX - MAY 26: A Uvalde police department officer reacts as Victor Escalon, Regional Director of the Texas Department of Public Safety South, speaks during a press conference on May 26, 2022 in Uvalde, Texas. According to reports, 19 students a

Minutes before the Uvalde school board leaders met to decide the future of district police chief Arredondo, his attorney released a lengthy statement.

It explained why Arredondo would not be attending, pointing to threats.

to appear without exercising his state rights to be armed," the statement read.

There was armed security at the meeting.

Arredondo’s attorneys also raised concerns about the district violating his procedural rights as an employee, and attorneys claimed Arredondo had asked for better security, equipment, and training more than a year before the mass school shooting on May 24.

He pointed blame at those responsible for security breakdowns that day.

"Director McCraw’s off-the-cuff comments, pointing the finger at Chief Arredondo after recognizing the faults of his own officers, was a smoke screen attempt to "blame the Mexican!" Arredondo’s attorney said.

Inside the meeting, board members briefly took comments from the public, who wanted the debate about Arredondo’s future to play out in the open.

"Our babies are dead, our teachers are dead," said Brett Cross, the father of one of the victims. "The least you can do is show us the respect to do this in the public."

So when the board did go behind closed doors, friends and family members of the victims continued to speak.

"I don’t know if the board members can hear me, but please change something," one person said.

"I’m Xavier’s mom. I miss my best friend. His brothers miss him. Three months and we have forever to live. I don't know how we're going to do that," Felicha Lopez said. "If the board can hear me, please change, please change things for our kids."

Then, after nearly an hour and a half of meeting behind closed doors, the board moved to fire Arredondo three months to the day after the shooting.