With years of therapy behind her, Christine Abasi manages a severe case of stuttering. Then, a class assignment triggered a discovery that changed the course of her degree plan.

ARLINGTON, Texas - It’s a little-known fact that one person stutters out of every 100 people.

The research and science of stuttering is gaining momentum in the U.S, and UT Arlington is paving the way with new areas for students. At least one graduating senior has made the topic her focus.

"Most children who start stuttering start around the age of 5. I didn’t start until I was about 10, which was very odd. And no one knows why that happens, especially at an older age like that," she said. "It got to the point when I was about 12 years old. I couldn’t get two or three words together without having some kind of stuttering episode."

With years of therapy behind her, Abasi manages a severe case. In fact, she has all three known forms of stuttering: repetition of words, word prolongation and speech blocks.

"I have all three of them that come out at various times with different words or sounds," she said. "In therapy, one of the first things they teach you is learning how to, what your tics and triggers are and figuring out the best techniques to manage all those things."

Fast-forward several years, Abasi is attending UT Arlington with good management of her stuttering. Then, a class assignment triggered a discovery.

"I found out there was very little information about things like what causes stuttering or the proper therapies and techniques used to help treat that and manage it," she said. 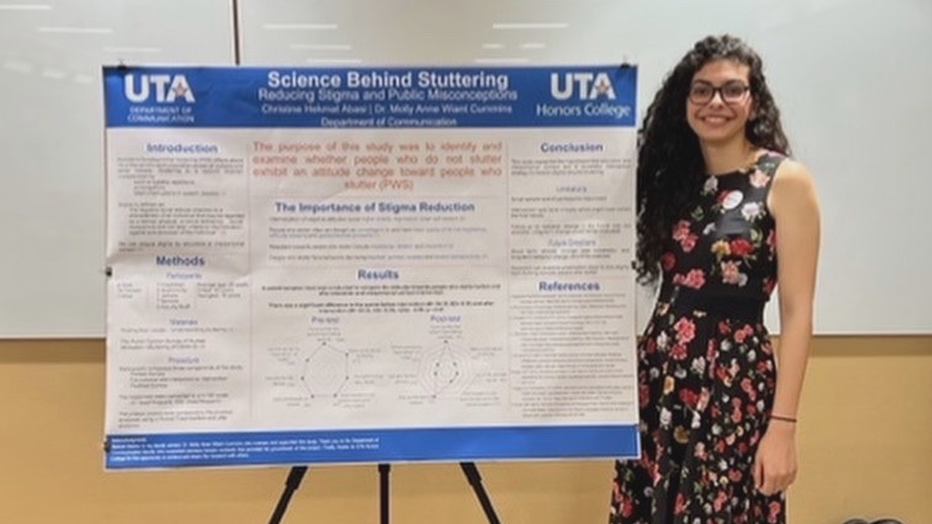 It changed the course of her degree plan.

On Friday, Abasi will graduate after earning two bachelor's degrees under a double major in psychology and communication studies.

She hopes to erase the stigma connected to stuttering. It’s something she believes President Joe Biden greatly helped with by calling attention to his own challenges with stuttering.

"It was impressive for me to see that he was vocal about it, and it wasn’t something he wasn’t shy about or was hidden," Abasi said. "The thing that helped me a lot that people were saying to me was it doesn’t matter if you stutter or not. It doesn’t matter what people say about you. What matters is you have a voice and a right to be heard with that voice."