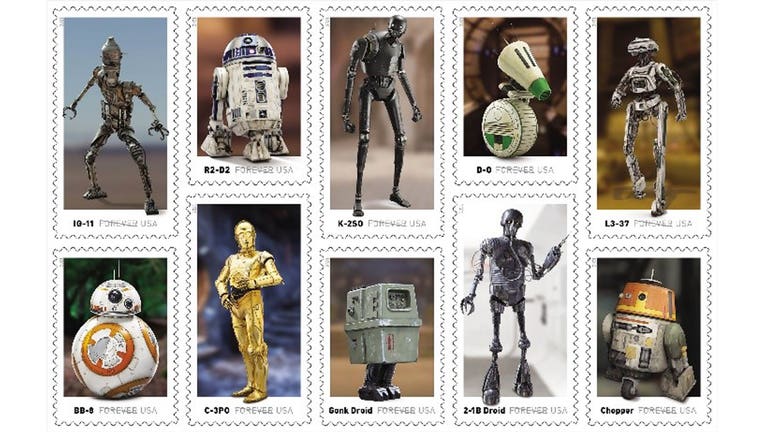 WASHINGTON - The U.S. Postal Service is launching a new line of stamps from a galaxy far, far away.

Mail will soon feature new stamps with droids from the "Star Wars" universe, including C-3PO and R2-D2, in honor of the 50th anniversary of Lucasfilm — the studio behind the beloved franchise.

In a release, the U.S. Postal Service said the backgrounds of the stamps represent some of the memorable adventures in the "Star Wars" galaxy, including the floating Cloud City above the planet Bespin, introduced in "Star Wars: The Empire Strikes Back."

How to celebrate Star Wars Day on May the 4th

With the world isolating at home due to the ongoing coronavirus pandemic, Star Wars Day couldn't have come at a better time.

USPS said the stamps are also a nod to Lucasfilm’s parent company, Disney, and its commitment to science, technology, engineering, and math (STEM) learning. The agency noted Disney’s continued collaboration between "Star Wars: Force for Change" and global pre-K-12 nonprofit organization "FIRST," which aims to expand access to STEM learning for children worldwide.

Greg Breeding was the designer of the stamps and pane, while William Gicker was the art director, USPS said.

USPS will release more details on the new "Star Wars" inspired stamp collection, including the release date, later this year.