The major league pitcher's mother took the stand along with a teammate on day two of the trial of a former front office employee accused in Tyler Skaggs’ death.

FORT WORTH, Texas - A jury learned more about the scene inside a Southlake hotel room where Los Angeles Angels pitcher Tyler Skaggs’ body was found in 2019.

The major league pitcher's mother took the stand, along with a teammate two other team employees, in the second day of the trial of a former front office employee accused in Skaggs’ death.

Eric Kay gave a slight acknowledgement entering the courthouse with a visible support system of loved ones by his side on Wednesday. Kay allegedly provided Skaggs with the fentanyl and oxycodone that killed him in July 2019. The team was in North Texas to play a series against the Texas Rangers. 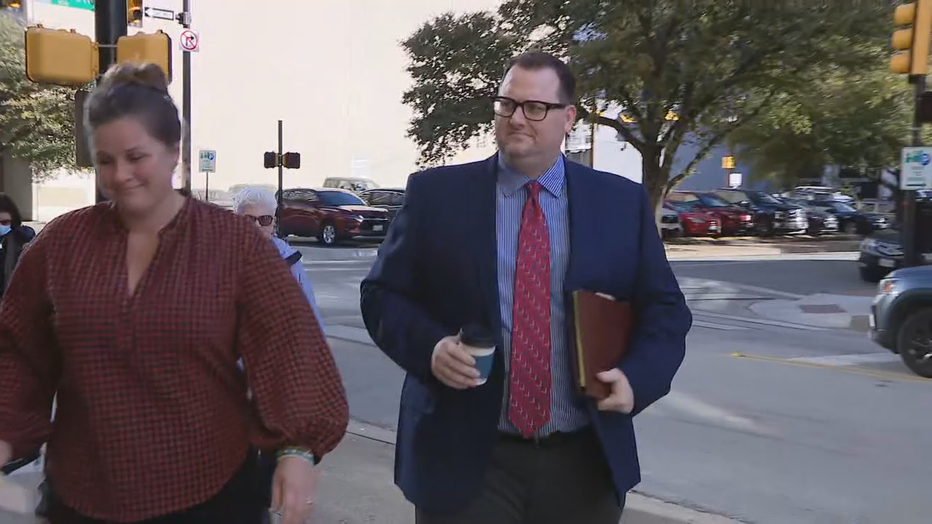 She said she was aware of a prescription drug problem years ago, but thought he'd gotten clean. She said the family was under the impression that after counseling and treatment, Skaggs was clean by 2019.

She told jurors of how her son was drafted at 17, right out of high school, and put a lot of pressure on himself to climb the ranks from the minors to the major league. She said he was often dealing with injuries and also had one surgery.

Prosecutor: Did he come home after the 2013 season?

Prosecutor: Did you learn anything about him then?

Hetman: Yes. He confided to us that he was having an issue with Percocet

Prosecutor: When you learned of the autopsy results, how did you take that?

Hetman: I was angry because I knew my son loved life and I knew he didn’t know there was poison in that pill that killed him.

Before Skaggs’ mother testified, one of his teammates, former Angels and now Los Angeles Dodgers pitcher Andrew Heaney, took the stand. His testimony included him confirming that some Major League Baseball players use illegal drugs.

He testified that Skaggs never offered him drugs, nor he did not know about Skaggs’ opioid use.

Charles Knight, the team’s traveling security guard, described entering Skaggs hotel room on July 1, 2019, and discovering his body face down on the bed.

A jury learned more about the scene inside a Southlake hotel room where Los Angeles Angels pitcher Tyler Skaggs’ body was found in 2018.

He said Skaggs was fully dressed, including boots. His feet were hanging from the bed and there was a pool of blood.

Other witnesses on the stand included Southlake Police Detective Thomas Robertson, who was one of the first to respond to the scene.

"On the desk there was a white powdery residue. There were four beers on the coffee table," he said.

The judge interrupted and asked about the powder substance and if it was in lines.

"It was choppy and scattered," Robertson said.

Testimony is scheduled to continue on Thursday.

At least five additional current and former players are expected to testify over the course of the next week.

And as the defense attempts to prove that Kay was not Skaggs’ sole drug dealer, attorneys indicated they will name former all-star pitcher Matt Harvey as a one of the late player’s drug sources.