An EF-0 struck in University Park and an EF-1 hit near Northaven Road just west of Central Expressway in Dallas on Sunday.

An EF-0 struck in University Park and an EF-1 hit near Northaven Road just west of Central Expressway in Dallas. The three in Ellis County are unrated because the wind speed is unknown due to no damage found or reported.

The NWS said the UP tornado had winds of 75 mph and the Dallas tornado had winds up to 90 mph. Meteorologist Patricia Sanchez, National Weather Service, says it was two separate tornadoes that briefly touched down in Dallas County.

"Near University Park mainly the damage was tree damage near the park some tennis courts," she said. "It looks like after that it lifted... it was the same storm it produced another area of damage."

Wind ripped the roof off a home on Northaven Road when the storm hit just after 2 p.m. Sunday. The couple who lives there had just remodeled it because it was damaged by the EF-3 tornado in north Dallas in 2019.

Security cameras captured the moments before the EF-1 tornado briefly touched down, with video showing wind blowing trees one direction then violently whipping them back the opposite way.

Several Dallas police officers stopped by to help homeowner Cherie Hart pack up her belongings on Monday. She was grateful for the help.

"I never met them before and they were going to be patrolling and watching my house for the next few weeks. I’m just hopeful," Hart said. 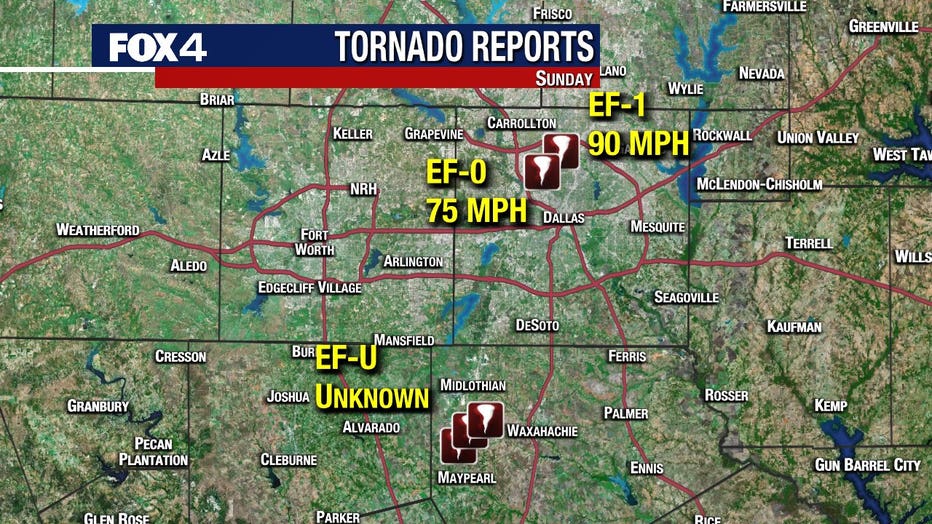 She said it’s frustrating to have to clean up after another tornado.

"At first I was like why us, why us? But then I was like, OK, both times we’ve been fine, we’ve walked out unscathed."

Aaron Pinkus owns North Haven Gardens and his business was heavily damaged by the EF-3 tornado nearly two years ago. This time the damage was less severe.

"Second time in two years, what are the odds?" he said.

He found a shade awning peeled back and the shop and garden area in disarray.

"Having this kind of thing come through after what happened before really got us on our toes and the anxiety is built up," Pinkus said.

"Every tornado has to start somewhere and in our case it started right over City Hall," said Steve Mace, University Park spokesman. "And the marking by the National Weather Service for their tornado warning didn’t come until 4 or 5 or 6 minutes later."

"Our takeaway is really easy — we were lucky," Mace said.