Many Tongans living in North Texas still have family members and property on the islands. Very few of them have heard from their families because communications are down for the foreseeable future.

EULESS, Texas - Devastating images from the Pacific island nation of Tonga show the far reach of the massive volcanic eruption over the weekend.

Tsunami waves triggered by the eruption cut off the nation’s communications to the rest of the world.

Meanwhile, local Tongans living in North Texas are watching the destruction from afar and praying for their families’ safety.

Many Tongans living in North Texas still have family members and property on the islands. Very few of them have heard from their families because communications are down for the foreseeable future. 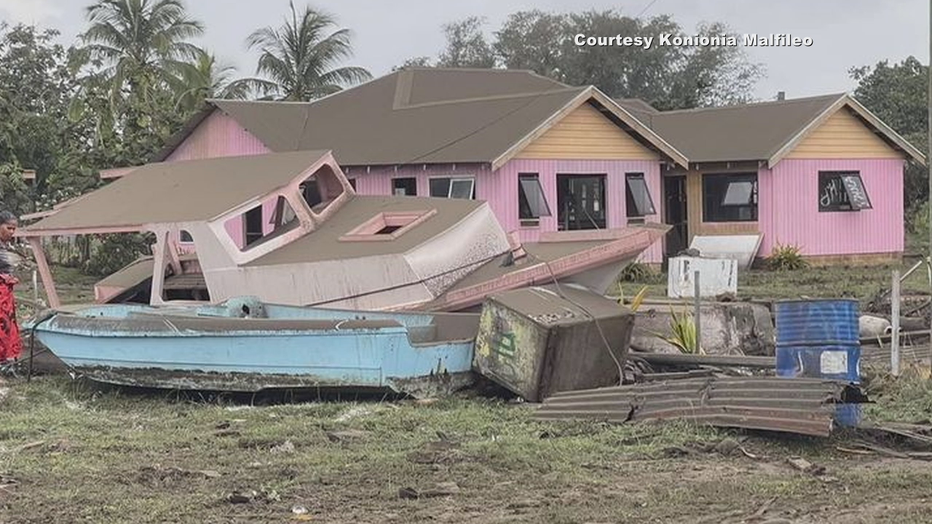 Ofa Faiva-Siale has lived in North Texas for decades, but she still has family in her native Tonga, including nieces and nephews who she would visit a couple times a year pre-COVID.

"You're afraid for them at first because you don't know what may happen," she said.

But seeing the devastating images of this past weekend’s sudden volcanic eruption, which seemingly occurred without much warning, has Faiva-Siale and many local Tongans in Euless afraid for the country.

"They could get 12-foot tidal waves, and they are a flat island and could easily be swept away," she said.

The eruption triggered tsunami waves that cut the fiber optic cable connecting the islands with the rest of the world, and it’s likely those communications will be down for weeks.

Tongans in North Texas say the only news they get is from the bits and pieces reported by Australian and New Zealand news outlets.

"It is very difficult not knowing what is happening if they're ok, how they're living, if they're cold, if their home is still together, or if they're homeless," Faiva-Siale said.

The Jan. 14, 2022, eruption of an underwater volcano near Tonga was captured on satellite. (FOX Weather)

But Viliami Asaeli’s family has been able to get a message from his niece and some pictures of the aftermath.

"The waves came into their damaged housing," he said. "But as far as lives lost, we were told they were all fine. So to hear that they're all fine, this is enough for us."

Initial casualties appear to be low so far. But Australia and New Zealand are sending reconnaissance flights to survey the overall damage and send in essential supplies.

Before and after satellite images show layers of volcanic ash covering homes and buildings in Tonga’s capital.

"To see how small Tonga was, they should be underwater right now," Asaeli said. "We're strong believers in our faith, and we believe that God was there to protect them even though we haven't heard anything yet."

Local Tongans are directing anyone who wants to help to donate to the Red Cross of New Zealand, which has a fund dedicated to help this cause.