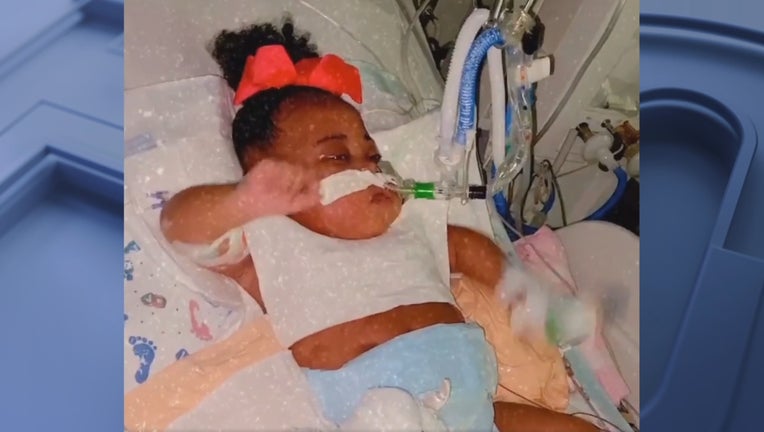 FORT WORTH, Texas (AP) - 3-year-old Tinslee Lewis, whose mother has waged a court battle to keep doctors from removing her from life-sustaining treatment, has improved enough that she was released from the hospital last week and will now be cared for at home, a group that’s been advocating for her said.

Texas Right to Life, the state’s largest anti-abortion group, said this week that Tinslee’s health had "so steadily improved" that she was released from Cook Children’s Medical Center in Fort Worth on April 7.

"It’s encouraging to see that the family and the hospital did get to work together so much that Tinslee was benefitted and actually gets to go home," Texas Right to Life spokeswoman Kimberlyn Schwartz said Wednesday.

The case has been making its way through the courts since November 2019, when the hospital had planned to remove Tinslee from life support after invoking Texas’ so-called "10-day rule." The law can be employed when a family disagrees with doctors on withdrawing life-sustaining treatment.

The law stipulates that if a hospital’s ethics committee agrees with doctors, treatment can be withdrawn after 10 days, as long as a new provider can’t be found to take the patient.

SEPTEMBER 2020: Cook Children's Hospital is urging the Texas Supreme Court to make a quick decision regarding the fate of a terminally-ill girl whose been on life support since she was born.

Texas Right to Life spokeswoman Kimberlyn Schwartz said that within the last year or so "the hospital and the family have worked well together."

Tinslee had been hospitalized since her premature birth in February 2019. The hospital has said she was born with a rare heart defect and suffered from chronic lung disease and severe chronic high blood pressure. She was put on a ventilator several months after her birth after going into respiratory arrest, the hospital has said.

Schwartz said that doctors eventually switched Tinslee from being ventilated through her mouth to having a tracheotomy. "It helped improve her health to the point that she can go home," Schwartz said.

She said that Tinslee, who is currently on a portable ventilator, has 24-hour nursing care at home.

A statement issued by Cook Children’s Health Care System this week said: "The medical teams at Cook Children’s have dedicated their lives to healing children, and go to tireless lengths to do what they believe in their hearts and minds to be the very best decision for each and every patient."

About two months into the court proceedings, Lewis had revoked the hospital’s permission to speak about Tinslee.

"We have been cherishing and enjoying Tinslee being home," Lewis said.