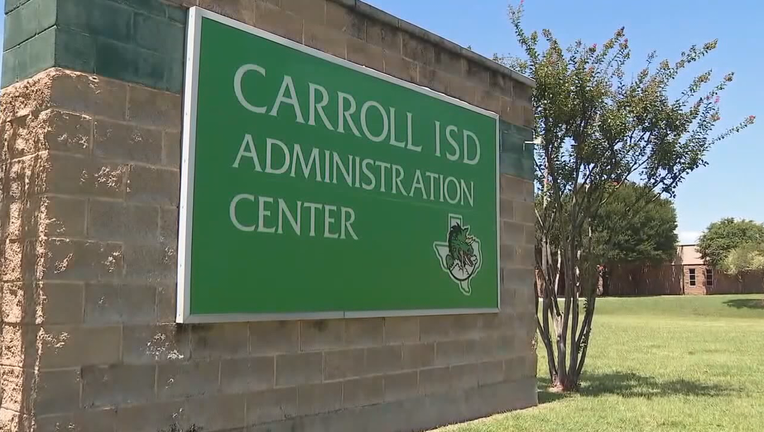 A new law requiring Texas schools to display donated "In God We Trust" posters is the latest move by Republican lawmakers to bring Christianity into taxpayer-funded institutions.

Under the law, Senate Bill 797, which passed during last year’s legislative session, schools are required to display the posters if they are donated.

The law went into effect last year, but these posters weren’t popping up then as many school officials and parents were more concerned about new COVID-19 strains and whether their local public school would even open for in-person classes.

The "In God We Trust" law was authored by state Sen. Bryan Hughes, the East Texas Republican who crafted Texas’ Senate Bill 8, which restricted abortion to the first six weeks or so of pregnancy starting Sept. 1, 2021. The abortion law artfully skirted legal challenge by relying on the public instead of law enforcement to enforce it.

Hughes’ "In God We Trust" poster law is also precisely written. Texas public schools or colleges must display the national motto in a "conspicuous place" but only if the poster is "donated" or "purchased by private donations."

After an appearance for a Northwest Austin Republican Women’s Club event on Tuesday, Hughes touted the new law and praised the groups stepping up to donate the posters.

"The national motto, In God We Trust, asserts our collective trust in a sovereign God," Hughes wrote on Twitter. "I’m encouraged to see groups like the Northwest [Austin] Republican Women and many individuals coming forward to donate these framed prints to remind future generations of the national motto."

Patriot Mobile, a Texas-based cellphone company that donates a portion of its customers’ phone bills to conservative, "Christian" causes, on Monday donated several "In God We Trust" signs to all Carroll Independent School District campuses, claiming it is their "mission is to passionately defend our God-given, Constitutional rights and freedoms, and to glorify God always."

"Patriot Mobile has donated framed posters to many other school districts in the Dallas-Fort Worth area and we will continue to do so until all the schools in the area receive them," the company said in a Facebook post. "We are honored to be part of bringing God back into our public schools!"

Carroll ISD includes Southlake, the mostly white, affluent Dallas-Fort Worth suburb. The community’s struggles with a school diversity and inclusion plan — as well as how parents opposed to the plan started a political movement there — were the subject of a seven-part NBC podcast released last year.

The Southlake Anti-Racism Coalition, or SARC, said in a statement that is not happy that the law mandates public schools put up these posters.

"SARC is disturbed by the precedent displaying these posters in every school will set and the chilling effect this blatant intrusion of religion in what should be a secular public institution will have on the student body, especially those who do not practice the dominant Christian faith," the statement read.

Donations of the "In God We Trust" posters have also been made to the Cypress-Fairbanks Independent School District, in the Houston area. The posters were a donation from The Yellow Rose of Texas Republican Women.

Moms for Liberty, a conservative nonprofit organization, donated posters for Round Rock Independent School District campuses, said Jenny Caputo, a spokesperson for the district. Most campuses have the signs up in a hallway near the front of each campus.

The Keller Independent School District in Tarrant County has received posters from a private citizen for all its facilities, and they are displayed mainly in front offices, said Bryce Nieman, a spokesperson for Keller ISD.

Erik Leist, a Keller resident and a father of a soon-to-be kindergartner, said the motto represents America’s founding and believes the law allows communities to do what they think is best.

"If it’s important to communities, the community will come behind it," Leist said. "If it’s not something that the community values, it’s not gonna end up in the school."

Leist also said he sees it as just the nation’s motto, not pushing any one religion.

"In God We Trust" origins

In 1956, Congress passed a joint resolution that made "In God We Trust" the nation’s motto, replacing "e pluribus unum (one from many)." Lawmakers did this partially to differentiate itself during the Cold War from the Soviet Union, which embraced atheism.

The "In God We Trust" national motto can be found on money and government buildings and has proven to be bulletproof when it comes to legal challenges that assert the reference to God could be seen as government-endorsed prayer, impinging on Americans’ First Amendment rights.

In a 1970 case, Aronow v. United States, a federal appeals court ruled "It is quite obvious that the national motto and the slogan on coinage and currency ‘In God We Trust’ has nothing whatsoever to do with the establishment of religion."

From motto to movement

In this century, there’s been a growing movement to place the motto in more visible government spaces.

Since 2015, efforts to place "In God We Trust" on police cars, for example, have spread. There’s even a website, ingodwetrust.com, that specifically states the movement is about protecting citizens’ "First Amendment right to religious liberty, a freedom that is being threatened through a well-organized and well-funded effort to remove all vestige of God from the public domain in America."

For Patriot Mobile, this is the company’s latest effort in its plan to "put Christian conservative values into action" and it has been targeting Texas’ public schools through its political action committee, Patriot Mobile Action.

During the past spring and leading into the May school board elections, the Patriot Mobile Action PAC raised more than $500,000 for conservative school board candidates across North Texas, including Carroll ISD.

The full program is now LIVE for the 2022 The Texas Tribune Festival, happening Sept. 22-24 in Austin. Explore the schedule of 100+ mind-expanding conversations coming to TribFest, including the inside track on the 2022 elections and the 2023 legislative session, the state of public and higher ed at this stage in the pandemic, why Texas suburbs are booming, why broadband access matters, the legacy of slavery, what really happened in Uvalde and so much more. See the program.

This article originally appeared in the Texas Tribune. Read more at https://www.texastribune.org/2022/08/18/texas-schools-in-god-we-trust/