Second bus from Texas drops off migrants in D.C., near U.S. Capitol

This is happening as DPS troopers continue to conduct enhanced inspections of commercial vehicles coming from Mexico, which continues to cause massive back-ups.

A second bus carrying migrants from Texas has arrived in Washington D.C.

It’s a promise Governor Greg Abbott made in response to how he feels the White House is handling the crisis at the border.

This is happening as DPS troopers continue to conduct enhanced inspections of commercial vehicles coming from Mexico, which continues to cause massive back-ups.

The governor is offering free trips to the nation’s capital to those interested.

Workers from Catholic Charities met the bus to help those people go on to their final destinations.

Meanwhile, the back-up of commercial trucks at the border is causing a host of economic problems.

As most Americans were asleep Thursday morning, a second bus from Texas dropped off dozens of migrants near the U.S. Capitol.

"These folks are actually legal immigrants. They've been paroled into our country by the federal government, mainly asylum seekers, I would imagine," explained Eric Cedillo, who is a clinical professor of law at SMU. 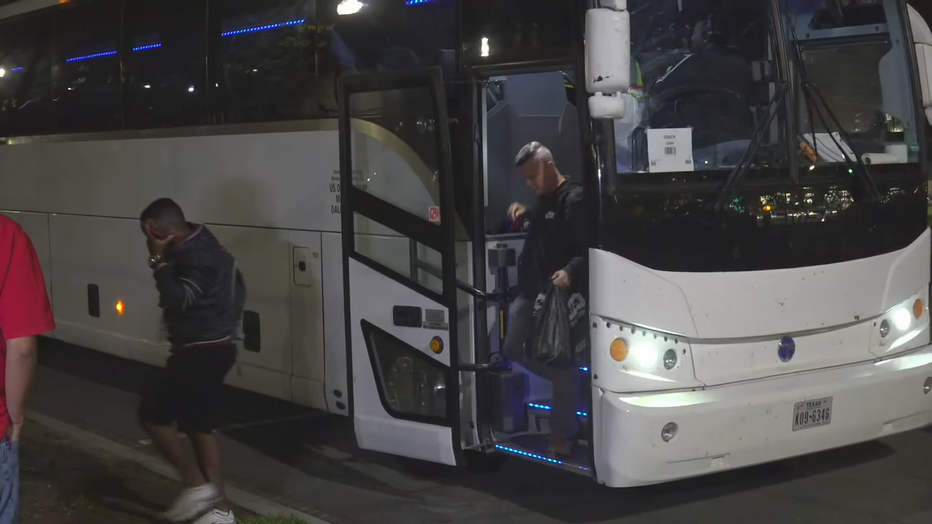 Cedillo said he expects the busing practice to continue for some time as the Biden administration called for an end to Title 42 next month, a pandemic policy that has been used to quickly turn away asylum-seekers.

The state of Texas said the migrants are getting on the busses voluntarily.

"So it hasn't really stopped the illegal migration of folks. That's been continuous, and that is something that, of course, is separate and apart from this particular issue," Cedillo said.

RELATED: COVID-19 asylum limits at US-Mexico border to end May 23

It’s an issue Gov. Abbott discussed during the unveiling of a DPS memorial in Austin Thursday.

"Just in the past 15 months, there's been more than 1.6 million people come across the Texas border illegally," he said.

Eight days ago, in response to the Title 42 announcement, Gov. Abbott ordered DPS troopers to conduct enhanced inspections of all commercial vehicles crossing from Mexico into the U.S.

The move has caused a massive clog at all commercial checkpoints.

"We do almost $100 billion worth of trade between the U.S. and Mexico," SMU economist Mike Davis said.

Davis added that most of those goods are transported by truck.

He said the massive delays in deliveries are very problematic for the economy.

"One of the great sadnesses of all this is that this is coming at a time when we already see shortages. Supply chain snafus and rising prices," he said.

On Wednesday, the governor said he struck a deal with the Mexican state of Nuevo Leon.

Nuevo Leon will add checkpoints and step-up patrols on its side.

Texas will drop the enhanced inspections disrupting trade, but only for travel coming from Nuevo Leon.

That bridge is just one of 13 commercial crossings connecting the U.S. and Mexico.

"You know what is left in the stores is going to be really expensive. And right now, consumers don't need higher food prices," Davis said.

Abbott said he would not repeal his new policy at all bridges until there are more assurances of security from those Mexican states.

The most dramatic backups of commercial trucks along Texas' 1,200-mile border have occurred at other bridges that do not share a border with Nuevo Leon.