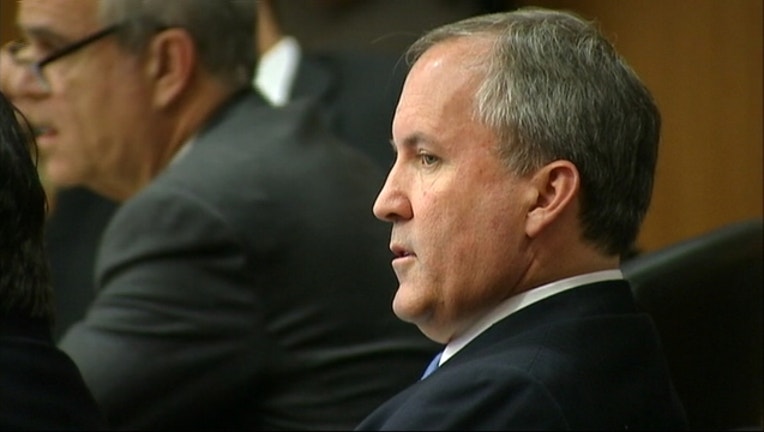 AUSTIN, Texas (AP) — Texas Attorney General Ken Paxton, who is under indictment on felony charges of duping investors in a tech startup, accepted $100,000 for his criminal defense from the head of a medical imaging provider while his office investigated the company for Medicaid fraud.

Dallas-based Preferred Imaging LLC settled a $3.5 million whistleblower lawsuit in a case handled by the U.S. Justice Department and Paxton's Texas Civil Medicaid Fraud Division, the head of which co-signed the agreement in June.

Paxton spokesman Marc Rylander said Tuesday federal prosecutors took the lead on the case and that the attorney general had no personal involvement. James Webb, the president of Preferred Imaging who gave Paxton the donation, did not immediately return an email and phone message.

The donation underscores the potential conflicts that Paxton, a Republican, is navigating as Texas' top prosecutor while the state prosecutes him on two counts of felony securities fraud. He has pleaded not guilty.

Ethics and legal experts say Paxton's accepting the money while his office investigated Webb's company was not a clear violation of Texas' loose ethics laws. But they said the donation at least had the appearance of conflict.

Webb is the most generous supporter of Paxton's legal defense, covering nearly one-third of the $330,000 that two dozen people donated last year. Paxton cannot use taxpayer dollars or campaign funds to pay for his criminal case, and is instead using an exemption under Texas bribery law that allows gifts to public servants when there is a "personal, professional, or business relationship" that is independent of their official duties.

Both the Justice Department and Justin Sumner, a Dallas-based attorney for the whistleblower who brought the lawsuit, said the state was involved in the investigation of Preferred Imaging.

In an emailed statement, Paxton's spokesman said federal prosecutors negotiated the settlement "on everyone's behalf." He said they took the lead, and he did not go into detail about the role the state's unit had in the case.

"We trust the U.S. Attorney's Office to handle these cases with professionalism and ensure that a fair settlement is reached," Rylander said.

Preferred Imaging admitted no wrongdoing while settling accusations that the company performed some procedures without an on-site physician present, which is in violation of Medicaid billing rules.

Sumner said Paxton had no direct involvement with the case to his knowledge and that there appeared to be nothing unusual about how the case was handled.

"It seems like they investigated thoroughly. I didn't notice any foul play," Sumner said.

No criminal trial has yet been set for Paxton, who has twice lost his attempts to have the indictments dismissed. He is also being sued by the U.S. Securities and Exchange Commission in a separate civil lawsuit, which similarly accuses Paxton of urging people to put their money into a tech startup called Servergy Inc. without disclosing he was being paid by the company to recruit investors.

If convicted of the criminal charges, Paxton faces five to 99 years in prison.

Webb is a low-profile GOP donor who has given more than $450,000 to conservative state candidates since 2009. Nearly half of that was $200,000 toward Paxton's run for attorney general in 2014, when the former suburban Dallas lawmaker was elected to succeed Greg Abbott, who is now Texas governor.

Craig McDonald, who runs the left-leaning watchdog group Texans for Public Justice, filed the original securities complaint against Paxton in 2014 that led to a criminal investigation. But he said he would be pressed to file a complaint this time because Paxton is taking advantage of vague Texas anti-bribery statutes that allow officeholders to accept gifts from friends without defining who meets that threshold.

Buck Wood, a veteran Austin-based ethics attorney, believes a case could be made against Paxton.

"The idea that you could accept a contribution to your so-called legal defense fund from someone that your office has under investigation is simply prohibited," Wood said.

The lawsuit against Preferred Imaging was filed on Dec. 30, 2014, less than a week before Paxton took office. Sumner said state and federal investigators began looking into the claims after the suit was filed.

Paxton's alleged investor deception happened in 2011, when he was still a state lawmaker. He was indicted by a grand jury in his hometown of McKinney in 2015, just six months after becoming attorney general, and has repeatedly said he will not resign.