TCU fans hoping to catch the Fiesta Bowl in Phoenix are finding out they probably won't be able to fly out in time.

FORT WORTH, Texas - TCU fans hoping to catch the Fiesta Bowl in Phoenix are finding out they probably won't be able to fly out in time.

Flights have already been canceled, so they're making different plans.

There’s a lot of disappointment to go around.

Fans who booked flights weeks ago are dealing with cancellations. Fans who want to get to the game last minute can’t find a flight, which means a lot of die-hard TCU fans are looking at a 15-hour road trip to Arizona.

"I waited with bated breath to see that they were going to be one of the top 4, and there was just no doubt I was going," TCU fan Susan Malone said.

And she’s not alone.

Horned Frogs football fans all over the country have been busy making plans to watch Saturday’s Fiesta Bowl in Phoenix against Michigan in person.

"We are driving to Austin [Thursday] to fly out on the very last plane and I’ve been watching," Malone said.

But fans like Malone can’t ignore the countless stories of canceled Southwest flights over the last few days and stranded passengers scrambling to make a backup plan.

"It’s scary, never ever, ever expected all of that," she said. "In my case, we’re going to drive. We’re going to split up the driving and try to get there by Friday morning."

The disappointment over canceled flights is clear on social media.

One person commented: "We are going, flying American [Airlines]. Shame on Southwest [Airlines]!"

Another, in response to whether she’s attending, wrote: "Ask Southwest if I’ll be there." 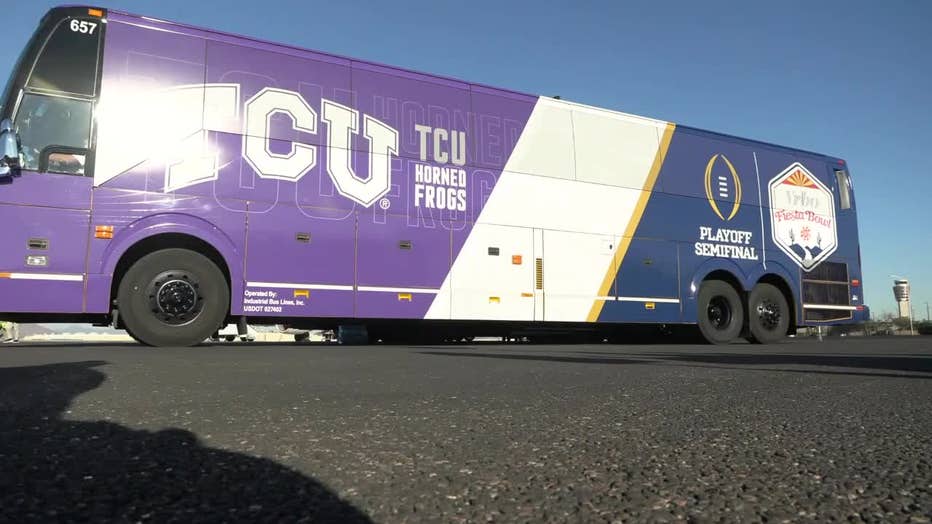 "That’s kind of sad, I mean. I feel disappointed for them. There’s been a lot of games I couldn’t go to, so I know how it feels," TCU fan Terry Koontz said.

Koontz said he and a friend are hitting the road on Thursday, and he said he’s got room for one more in the backseat.

"If somebody whose flight got canceled, I think it offers them a way of going that they might not have tried to do by themselves," he added.

Koontz said the safest bet is to make it a road trip.

And with TCU in her blood, Malone said she won’t let anything keep her from getting to Arizona this weekend.

"Dad was letterman for the golf team and a center on the football team, and mom was voted Ranchweek Queen," she said. "We didn’t do well when I was a student, so I’m reliving my co-ed days as an adult."

One family decided to make a week-long family road trip out of the drive to Phoenix.

They have plans to stop in New Mexico and Colorado before heading back to Texas.