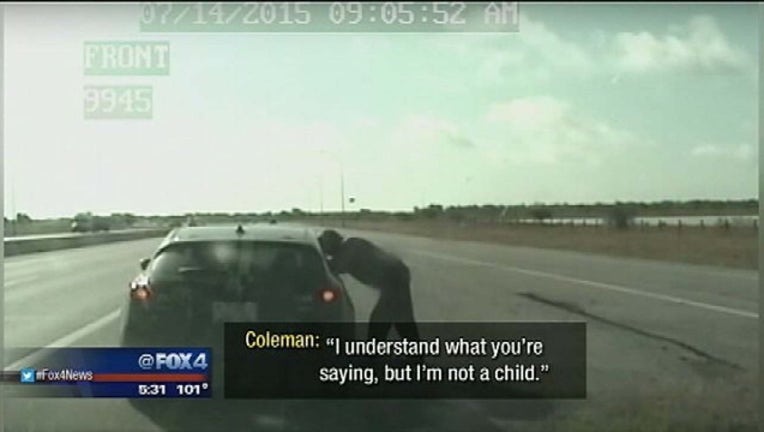 Dallas police union leaders up in arms, accusing a state representative of lying after a police stop last month in Austin between a sheriff's deputy and Houston-area lawmaker.

Because of the spotlight on law enforcement recently, the Dallas Police Association says it's important for them to speak up and dispel a recent accusation.

The Austin County Sheriff's Office released dashcam video to let people decide for themselves whether the sheriff's deputy did anything wrong on July 14 when he pulled over Houston State Rep. Garnet Coleman for speeding.

Coleman brought it up last Thursday in a state house hearing on Sandra Bland's jail death in Waller County.

Coleman got choked up describing his own traffic stop, accusing the deputy of being rude and treating him like a child.

Even when the dashcam video surfaced disputing those claims, Coleman has refused to apologize.

“Stop speeding in a state car, OK?” the deputy says to Coleman in the dashcam video. “You got state plates on here, man.”

Deputy: “Really? Is that what you want to tell me? It’s a state official plate. Do you realize how bad that looks?”

Coleman: “I understand what you're saying, but I’m not a child.”

Deputy: “I didn't say you were a child.”

The deputy let him go with a warning.

Coleman's handling of the incident has upset police associations around Texas.

Dallas Police Association President Ron Pinkston says Coleman lied when he said the officer berated him and called on him to apologize to the deputy and all law enforcement in the state.

“The officer was very professional,” said Pinkston. “The state representative is the one who lacks integrity on this.”

By phone, Coleman told FOX 4 that he will not apologize.

“You know how someone uses a superior tone with you like they’re your father?” said Coleman. “And as a black person, that is something that is hard to tolerate by black people because that's been our existence.”

“It doesn't matter to me what their position is,” he said. “I’m not engaging with the unions and I’m not gonna apologize because there's nothing to apologize for.”