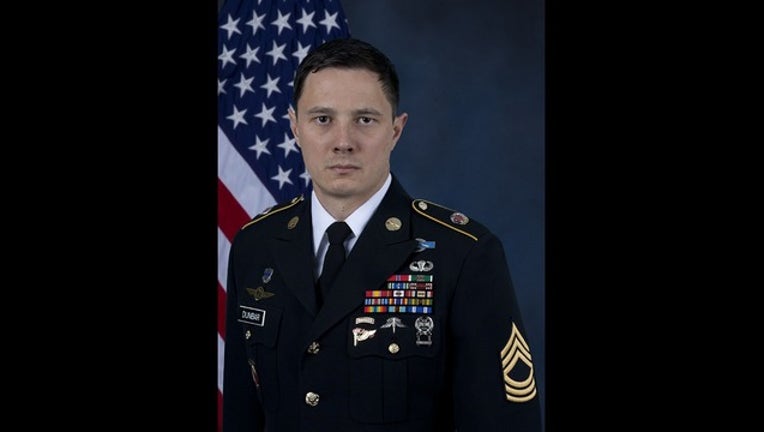 Washington, DC - The American service member killed this week by a roadside bomb in northern Syria was a 36-year-old Army soldier from Texas, the Defense Department said Saturday.

Master Sgt. Johnathan J. Dunbar, of Austin, died Friday as a result of injuries suffered when an improvised explosive device detonated near his patrol in Manbij -- not far from the border with Turkey -- during an operation against the Islamic State group, officials said.

A British armed forces member also was killed and five other people were wounded in Thursday's bombing-- a rare attack since the U.S.-led coalition sent troops into the country.

"Coalition forces, in an advise, assist and accompany capacity with our partners, were conducting a mission to kill or capture a known (IS) member when they were struck by an improvised explosive device," the U.S.-led coalition said Saturday in a statement to The Associated Press.

Dunbar was assigned to the headquarters of the U.S. Army Special Operations Command in Fort Bragg, North Carolina.

Manbij, a mixed Arab-Kurdish town, is under threat of a Turkish military operation. Ankara says the town is controlled by Syrian Kurdish militiamen that Turkish officials claim are "terrorists" and an extension of Kurdish insurgents inside Turkey.

In recent weeks, Manbij has seen an assassination attempt against a senior Kurdish official on the highway outside the town and a number of small explosions. Authorities imposed a curfew after 11 p.m., and in recent days barred motorcycles from moving around the town after sunset.

Dunbar is the fourth American service member to die in Syria since the U.S. began attacking Islamic State group militants there in September 2014, according to the Pentagon's Defense Casualty Analysis System.

The others were Air Force Staff Sgt. Austin Bieren, whose death was specifically labeled by the Pentagon as noncombat related; Navy Senior Chief Petty Officer Scott C. Dayton, who was killed by an improved explosive device; and Army Spc. Etienne J. Murphy, who died in a vehicle rollover.