Family friends say a mother shielded her child as the explosion next door took out part of their home. She and her husband remain hospitalized. The children are okay.

PLANO, Texas - Editor's Note: On 7/21, police announced the explosion may have been intentional

Fire investigators in Plano say an isolated gas leak caused a home explosion that hurt six people. Crews are still working to figure out the cause and location of the leak on Monday.

Family friends say a mother shielded her child as the explosion next door took out part of their home. She and her husband remain hospitalized. The children are okay.

Authorities have not officially released the names of the victims or their conditions. Neighbors say the man who lived in the home alone would often be seen outside mowing the grass.

The Plano fire marshal determined the explosion at 4429 Cleveland Drive was likely caused by an isolated gas leak at the home.

"It’s premature at this point to guess if it was an appliance in the home or what," said Plano Fire Capt. Peggy Harrell. "As you can tell, we have quite a bit of rubble to sift through in our investigation."

Harrell said it took firefighters six minutes to locate the sole occupant of that house: a male. He was rushed to the hospital. His name has not been released.

Jennifer and Philip Jagielski and their three kids live next door to where the home exploded. They are now recovering after their home was torn apart during the explosion, too, sending all of them to the hospital.

"The morning that this happened, their 6-year-old had actually had surgery for a hernia. So as you see on this right side of the home where the most of the damage is done, that is their master bedroom. They were with their son in the master bedroom tending to his wounds because he’s got quite an incision. So they were right around him when the blast went off," she explained. "Mom’s doing okay now. I was with her late at the hospital last night squeezing hands as they were digging things out of her back. And I can’t even tell you what a testament to what an amazing woman she is and that mother’s love. Because for every piece that they pulled out of her and every stitch that they needed on her back, she was grateful that that was one less thing that wasn’t in her child because he was shielded in front of her."

Jennifer and Philip have never met their neighbor. They only rented the home a couple months ago while their new home is being built.

Jennifer’s brother, Jeff Palmer, spoke with FOX 4 outside Medical City Plano. He’s worried about the trauma his nephews are experiencing.

"Imagine sitting there watching TV with your 6-year-old who just had surgery that morning and your room just blowing up. You never expect something like this to happen to you," he said. "They need all the love and support they can get."

Fire investigators in Plano say an isolated gas leak caused a home explosion that hurt six people. Crews are still working to figure out the cause and location of the leak.

"They know that these boys are going to need some emotional help for what has happened to them," Reedy said.

Still, while the three children are now out of the hospital and recovering, their mom and dad are still being treated.

Reedy says she lost a child earlier this year and Jennifer was there for her.

"She was there just holding my hand just a few months ago when it was my turn," she said.

"It was just my turn to serve her and help her in a way that she helped me that no one else could," she said.

Tyler Craven's training as a U.S. Marine came in handy Monday afternoon. He and a few of his neighbors were the first to reach some of the victims trapped in their Plano home after the explosion next door.

"The wife came out as I was coming in. She said her family was in the back bedroom," he recalled. "We ran into the house adjacent and grabbed the little boy who was bleeding pretty bad. But the whole house was just rubbish. It just looked like a bomb exploded in there."

Video from a neighbor's camera captured the force of the blast. A giant piece of plywood embedded in the ground. A woman who was showering at the time got hit by flying glass.

City inspectors spent Tuesday surveying the damage. Some homes deemed too unstable were marked with a red notice. 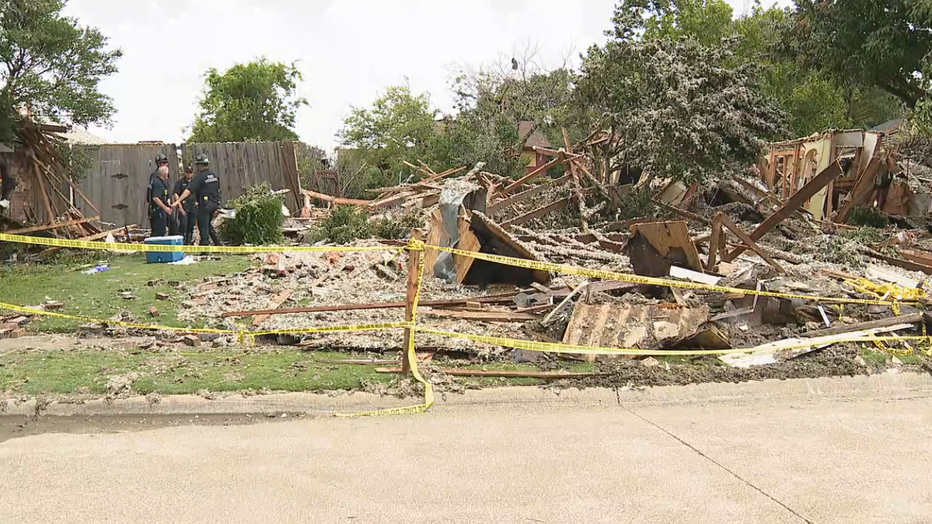 Homes with less severe damage were marked with a yellow notice.

Crews from Atmos Energy were back in the neighborhood checking the gas lines. No other leaks have been found.

Homeowners are left to pick up the pieces.

Harrell says to her knowledge there were no reports of any gas leaks prior to the explosion.

Reedy is organizing a fundraiser for the Jagielski for the family. She says they were renting this home and have renter’s insurance, medical bills and belongings will add up.

A police K-9 was also brought in to check for any explosive devices, but none were found. It’s why this is not considered a crime scene.

While investigators suspect an isolated gas leak, they’re still investigating and looking at all options.