A serial thief who has been caught on camera swiping wallets in multiple counties across North Texas is apparently at it again — this time in Ellis County.

WAXAHACHIE, Texas - A serial thief who has been caught on camera swiping wallets in multiple counties across North Texas is apparently at it again — this time in Ellis County.

A viewer provided FOX4 video of what appears to be the same woman stealing keys and a wallet at a business in Waxahachie.

"June 1 I got a call… that a lady had come in and stolen one of my nurse’s credit cards and then went to Best Buy right after that to make some purchases," said Matthew Darnall, Infinite Home Health Care. "The only people who come in to our office are delivery people -- UPS and Amazon."

Video shows the woman walking down hallways and then into the office so she could speak with the director of nurses.

"Asking questions regarding her grandmother in getting some help," said Meagan Carter, Infinite Home Health Care.

Carter said she usually keeps her wallet on her desk along with her phone. She left her office to get someone to help the woman with questions about her grandmother.

"When she came in and had to have opened my wallet, got two credit cards and... that was it," Carter said.

That same day she also went to the Elan Med Spa in Waxahachie. 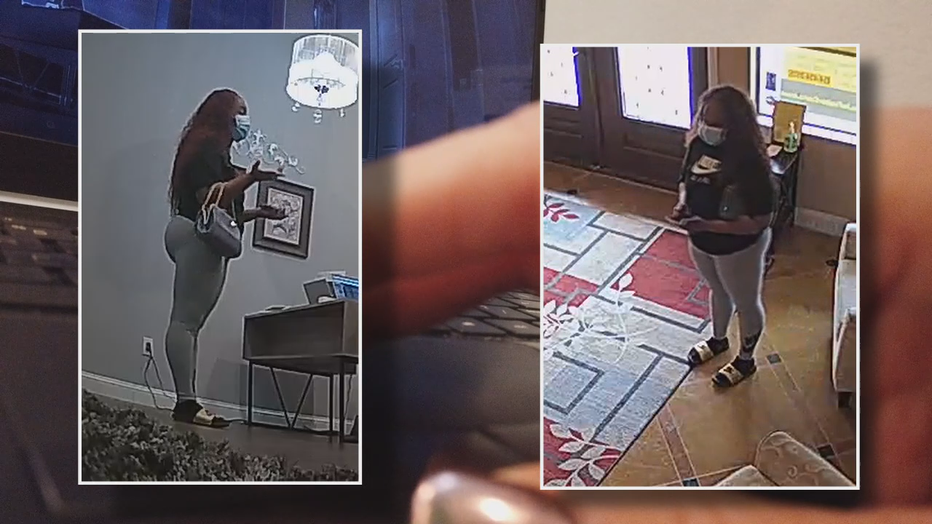 "We've looked at surveillance video from both places and the woman is wearing the exact same clothes," said Patricia Pierce, Elan Med Spa.

She ultimately visited three times before making an appointment for June 16.

"Whenever my daughter went to the back she grabbed my keys, grabbed her wallet and then put them inside of her purse and acted as if nothing happened," Pierce said.

But something did happen that's changed her.

"We feel violated and really hurt that you can't trust people the way that you think you can trust people," Pierce said.