Teen who died in crash remembered by Ponder community

Sawyer Mulkey crashed her car while failing to navigate a 90 degree-turn on the way to school Wednesday.

PONDER, Texas - The Ponder community is remembering a teen killed in a car crash.

Harper Mulkey said her younger sister, 16-year-old Sawyer Mulkey, was her best friend, even as they used to fight over "little things."

"She’s my best friend," Harper said. "She, eventually, quit taking my cloths which probably helped. Like, I moved out and she couldn’t take my clothes anymore, which was super helpful."

Sawyer followed in her sister’s footsteps, including on to the volleyball court, which makes Harper's loss even more tragic.

The Ponder High School student crashed her car while failing to navigate a 90 degree-turn on the way to school Wednesday.

Sawyer was not wearing a seat belt as her car drove straight off the roadway and rolled over, according to investigators.

"She didn’t feel any pain," her mother added.

Anise said the teen gave the world so much love.

"She poured herself into her family and her friends," she said.

The community is returning that love.

That was evident as Sawyer’s club volleyball coaches walked her jersey onto the court to allow her to start in one last match Saturday.

"In the position that she would’ve played," Anise said. "They were undefeated [Saturday]. Yeah, they went undefeated. So, in her honor, they played for her." 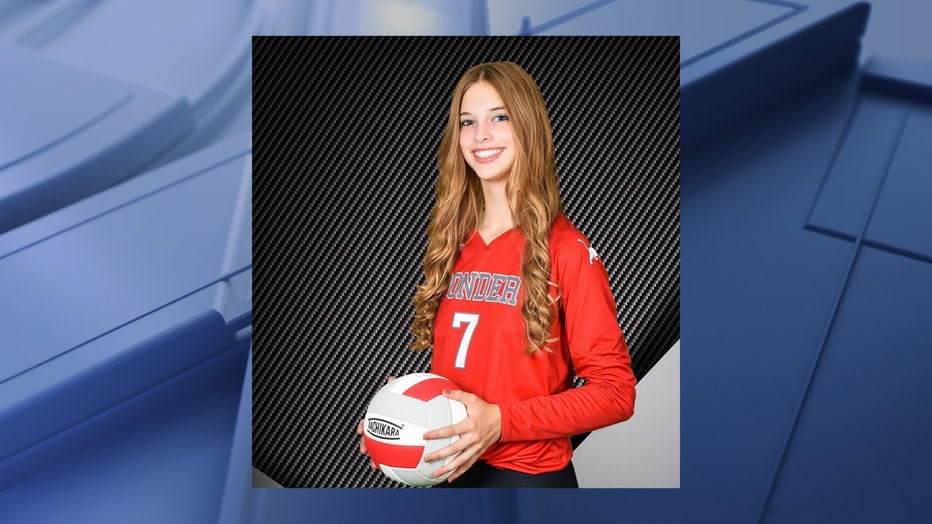 READ MORE: Funeral held in Arlington for guardsman who drowned on Texas border

An annual scholarship has been set up in Sawyer's name. It will go to a North Texas club volleyball player, and the winner will be chosen by the Mulkey family. Click here for more information.

Sawyer’s favorite color, yellow, is seen on ribbons across town. Many are also wearing the color.

"You know, ironically, I don’t wear a lot of yellow, which is making this hard. I have to buy new clothes," Harper said. "She’ll always be my best friend. We were close. Closer than I am to anybody. I knew her better than anybody else ever did, I think."

And they believe she’s smiling while watching over them.

Members of the Ponder High School community will gather for a vigil on the football field Sunday evening.