Normally, before a big Dallas Cowboys game, especially around a holiday, the RV lot at AT&T Stadium is pretty packed. But Friday night, it was a much different scene, almost certainly due to the cold.

ARLINGTON, Texas - Normally, before a big Dallas Cowboys game, especially around a holiday, the RV lot at AT&T Stadium is pretty packed.

But Friday night, it was a much different scene, almost certainly due to the cold.

There are a lot of die-hard Cowboys fans, but from the look of the empty RV lot, the weather kept them at home, possibly waiting until Christmas Eve to start tailgating.

On Christmas Eve, the Cowboys take on their rival, the Philadelphia Eagles.

Typically, before the game, the RV lot outside AT&T Stadium looks like a party.

"It’s normally crowded, we normally have everything set up out here," fan Kevin Kodama said.

But the arctic blast has held North Texas below freezing for more than 24 hours, a likely deterrent for fans getting to the RV lot early. 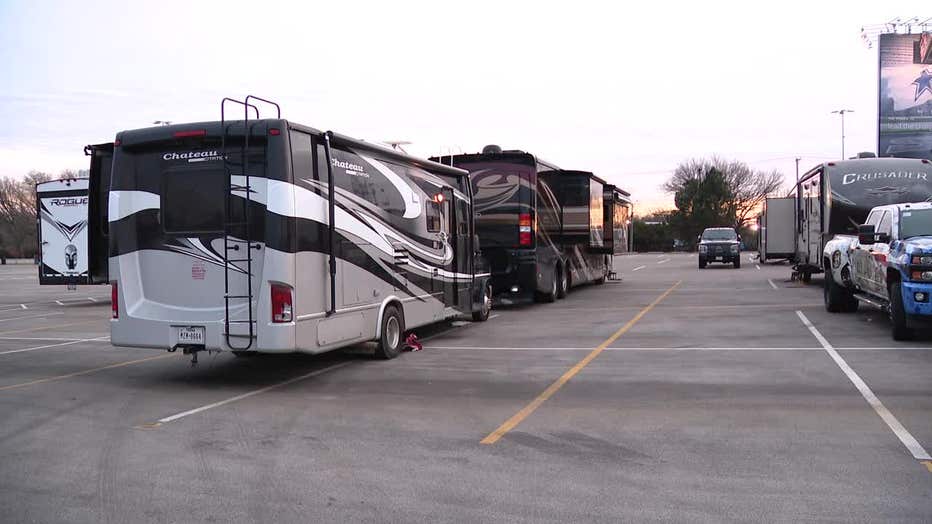 Brenda and Bill Flowers drove in from Greenville.

"About noon, because we expected it to be full and it wasn’t, it was kind of surprising," Bill said.

Kodama drove down from Lucas, and had some work to do before the party starts.

"My pipes are frozen. I’ve got a hot water deal below and that’s all hot, but it can’t get through all the piping," he said.

Kodama had to buy space heaters Fridays because of his frozen pipes.

"Last night, I left my engine on and the heat from the front is going to help heat this thing up," he said.

Fans said the RV lot is usually about 70% full at about 5 p.m. the day before a game.

The lot of about six RVs was a sharp contrast to the day before Thanksgiving a month ago.

Last month, people were outside grilling and kids were playing football.

That was not the case Friday, instead, fans spent time together inside with the heat.

With the rival Eagles in town, fans definitely want a victory, but had mixed feelings predicting the outcome of Saturday’s game.

"Philadelphia doesn’t need a win, and Dallas has already clinched, so I think it is going to be a weird first half and rest everyone in the second half," Bill said.

"I want them to win, but you never know with them. You don’t know who is going to show up," Kodama added.

Fans who have tickets will be inside AT&T Stadium, which will have the heat on, but at kickoff Saturday, for those outside, the weather could be just above freezing.