Since the invasion began, Reuters News agency reports that Russian authorities have arrested 5, 500 demonstrators supporting Ukraine. Some people of Russian descent living in North Texas feel the same way as those protesters.

DALLAS - Anti-war protests continue in Moscow and dozens of other cities across Russia, too.

Some people of Russian descent living in North Texas feel the same way as those protesters.

Mikhail Uspenski is the owner of Russian Banya of Dallas and understands emotions surrounding his home country. In a Facebook video, he spray painted a direct message of where he stands. 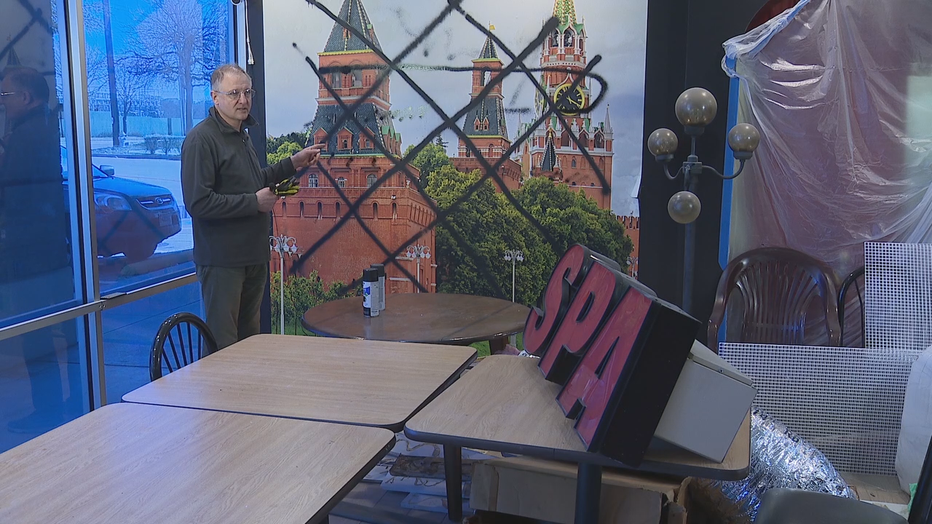 "I love my country. I don’t like my government," he said.

Uspenski is new to North Texas. He’s taking over the business and remodeling. It’s more than a decade old with vintage Russian décor, but there’s one image he no longer wants to see.

The Moscow Kremlin is a governmental fortress more than 500-years old.

When thinking of loved ones back home, Uspenski believes leaders inside the Kremlin, like Vladamir Putin, are destroying reputations and lives.

"It’s nearly a shame to be Russian after that because people say you are from the country where Putin is the ruler," he said.

"And there’s no possibility to leave country right now. Everything is sealed," he said. "The borders and the airports, there’s no connections. You can’t get a visa."

The 57-year-old says Russians he knows are against the invasion of Ukraine.

"You can express your attitude, and that’s what I did," he said.

So, without hesitation, Uspenski is making his mark by spray painting over a picture he says symbolizes what’s wrong with Russia.

"Because I don’t want Putin to be there," he said.

Uspenski says he loves his Ukranian neighbors, and he loves where he’s from.

"We all have some connections, relatives there in Russia, in Ukraine, friends," he said.

But Uspenski wants North Texans to know he will not support Putin’s deadly war.

"This is a criminal. He’s got his hands covered with blood up to here," he said.

Uspenski says he debated dropping Russian from the name of the business but ultimately decided against it, saying ones in charge of Russia now don’t represent the way he views his country.